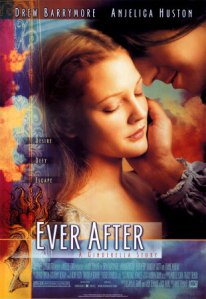 When I did my Fairy Tale Round-up for Cinderella a few weeks ago, I forgot a perfectly lovely movie.  Beedrill pointed it out, which sent me off to Netflix to request a disc and re-watch Ever After.

It’s a charming retelling of Cinderella, starring Drew Barrymore as Danielle, a smart young woman trodden-down by her stepfamily.  Set in Renaissance-era France, there’s no magic but plenty of whimsy, and definitely a fairy tale feel.  The plot is pretty standard fare, but the characters really shine.

Danielle is a wonderful Cinderella, well-read and keenly aware of the injustices of the society around her.  I do wonder a little why she never set out to find a place away from her stepfamily, but this is mostly justified by her circle of friends among the servants and her obvious attachment to her home.  There’s also an interesting dynamic between Danielle and her stepmother, the Baroness, as Danielle longs for acceptance from “the only mother she’s ever known.”

The stepfamily is wonderful–the Baroness is nasty, demanding, and selfish, while bemoaning how hard she tries and how little everyone around her appreciates all that she does for them, and can’t everyone just put in a little more effort, please.  It reminds me a bit of The Devil Wears Prada, actually.  The older stepsister, Marguerite, is beautiful but horrid and self-absorbed, while the younger stepsister, Jacqueline, is a sympathetic if largely passive character.

Danielle’s friends among the servants are mostly minor characters, but it’s so nice that they exist–so many characters, Cinderellas and others, seem to be utterly alone in the world, which just isn’t realistic.  Danielle’s friends collectively serve the role of fairy godmother, with some help from Leonardo Da Vinci.

Danielle’s prince is Henry, and if there’s an implausible aspect of the story it’s in what Danielle sees in him.  He’s handsome enough, and he’s a prince of course, but in the beginning of the story he’s also arrogant and immature.  He grows rapidly under exposure to Danielle’s philosophy and far more mature view of the world, so I suppose he does seem to have potential.  They have a good chemistry so I believe she likes him…I’m just not always sure why!

There are some excellent funny moments in here, especially involving Da Vinci, or the stepfamily.  There’s also a sequence near the middle involving a group of gypsies that I don’t want to spoil for anyone…so I’ll just say it’s wonderful!

Any criticisms…well, the dialogue is remarkably formal at times.  It’s occasionally off-putting, though mostly I think it works with the style of the movie.  The post-ball timeline is very unclear and it’s hard to tell how much time is elapsing between events.  I’m also a bit doubtful about how quickly they contrive to hold royal weddings, and the apparent ease with which people can get in or out of royal engagements…  But all of those are minor points, far secondary to the drive of the story.

This movie reminds me a little of Robin McKinley’s Beauty.  It’s not anything too radical or innovative, but it’s a lovely retelling with a strong heroine and a sweet romance.  And any comparison to a McKinley book can be considered a high compliment!

22 thoughts on “Retelling Cinderella on Screen”