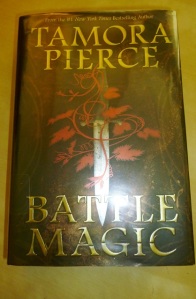 Tamora Pierce’s latest book, Battle Magic, takes us back to the Circle of Magic universe, to revisit familiar characters and explore new countries and magic.  Although I get more excited for her Tortall books, this one promised a new adventure with some of my favorite this-universe characters, Briar, Rosethorn and Evvy, so I was still anticipating the read–and it didn’t disappoint!

Briar and his teacher, Rosethorn, are plant mages; Briar’s student Evvy possesses stone magic.  All can speak to and control the forces they have magical affinity with.  They’re on a long journey away from their home country, first to the welcoming and magical-laden country of Gyongxe, and then to the wealthy and ambitious country of Yanjing.  Yanjing’s emperor initially welcomes the group, but he is cruel, ruthless and power-hungry.  Soon armies are marching, and Rosethorn, Briar and Evvy are enmeshed in warfare.

Slotting this one into the rest of the series, Battle Magic is set after Street Magic and before The Will of the Empress; Briar is 16, Evvy is 12. This is more or less stand-alone, but I think there are a lot of references that would be hard to sort out without reading the earlier books (at the least, Briar’s Book and Street Magic).

I was most looking forward to revisiting favorite characters, and that was a great part of the book.  I always enjoy Briar’s plant magic, and it was interesting to watch the characters’ growth, especially because of the way this fit in between the other books.  The relationship between Briar, Rosethorn and Evvy is really lovely.  They’re essentially a family unit, if an unconventional one.  I love the way Briar sometimes jokingly calls Rosethorn “Mother,” and she does mother both Briar and Evvy–in her own stern, undemonstrative way.  At the same time, Briar is fiercely protective of both “his girls,” and even Evvy has moments of defending the others.

I also love the magic.  I prefer the Tortall books in general, but I really love the way magic works in the Circle of Magic series.  Pierce does so well dealing with things outside of normal senses, describing how Briar and Rosethorn understand and engage with plants, and Evvy with stone.  And I always love massive, impressive displays of magic.  As you might expect from the title, the magic in this book is mostly used in warfare, in remarkably creative ways–like when Briar or Rosethorn cause wooden weapons of the enemy to start sprouting leaves, or even develop into full-grown trees in seconds.

Pierce’s books have in some ways grown more violent in recent years.  There were always swordfights and hostile magic, even in the original Song of the Lioness quartet, but the violence has become more real and less vague epic-battle.  This book is no exception.  I think it still falls under the YA category, but it is, after all, called Battle Magic.  It’s not too graphic in its goriness, but there is a lot of fighting and a lot of dead bodies (not all soldiers–or humans, if animal death particularly bothers you).  There’s also one torture scene of a major character, which I don’t think is quite as bad as the phrase “torture scene” implies, but it’s definitely clear and unpleasant.  If you’ve read Pierce’s recent books, there’s nothing shocking here, but if you’re jumping from earlier books, be warned.

I would have liked something a little less war-focused, but this did have the strengths I look for in Pierce’s books–strong, well-developed characters, fascinating magic, complex cultures and interesting magical creatures.  Another solid installment from a favorite fantasy author.

Other reviews:
Bookyurt
My Life Is a Notebook
Homewood Public Library
Anyone else?