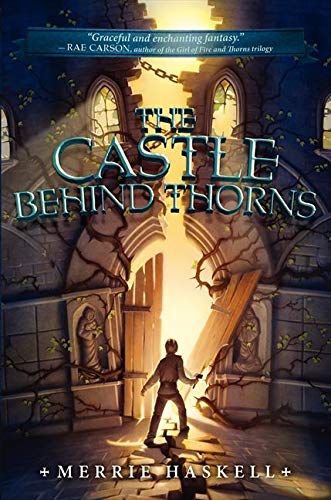 I enjoyed The Princess Curse by Merrie Haskell, which seemed like a good reason to explore what else she’s written—which brought me to The Castle Behind Thorns. Not as close a fairy tale retelling as I had hoped, but still an engaging fantasy.

The Sundered Castle has stood abandoned and surrounded by a wall of thorns for thirty years, and Sand (Alexandre) has never given it much thought. No one in the village ever has. But one day Sand awakes to find himself inside the castle, inside the thorns, with no way to get out and evidence all around of a bigger mystery than the local story can explain. The earthquake that supposedly damaged the castle can’t account for shredded pillows or anvils wrenched in half. Using his wits and his blacksmith skills, Sand begins repairing items he needs—and some of the repairs work strangely, perhaps magically, well. Most significantly, Sand replaces a fallen corpse on its shelf in the crypt; a few days later, Perrotte emerges, restored to life and anxious to learn what became of her family and her castle.

Most of the book features only Sand and Perrotte, and they’re strong characters to be able to carry it so well. Both have passionate interests (Sand in blacksmithing, Perrotte in astronomy), both struggled with the path their family wanted them to walk, and both are uncertain about what direction their future, if they manage to escape, will take. Perrotte is thirteen (not counting time spend dead) and Sand slightly older, but while they mostly read young, they also are on the brink of making decisions about their adult lives—which makes sense for a roughly Middle Ages-set book.

I can’t say I ever found blacksmithing to be terribly interesting, but through Sand’s eyes it has a great beauty and artistry–and I’ve always found astronomy interesting!  I tend to like characters (and people, for that matter) who are passionate about something.  Sand and Perrotte are sympathetic, essentially good but flawed enough to squabble, lose their tempers or make occasional wrong choices, and it’s easy to relate to their uncertainty about what choices to make in life.

There are some fairy tale elements here—the wall of thorns, of course, and Perrotte’s death and resurrection bears some resemblance to both Sleeping Beauty and Snow White. Perrotte also has a wicked stepmother—but interestingly, she’s balanced by Sand’s kind, loving stepmother, Agnote. Despite having very little “screen time” (page time?) Agnote is one of the more vivid characters, wise and strong and clearly loving and being loved by Sand.

The book mingles magic and religion, in a very Middle Ages kind of way. Sand’s mending ability and the wall of thorns have all the appearances of magic, Perrotte’s return to life is given more the feeling of a miracle, and Sand and Perrotte both turn to the saints honored in the castle’s chapel for guidance.

That chapel reference brings me to one aspect that I found more difficult than the balance of magic and religion. Some of the choices of this story lead it to unavoidably creepy places. Perrotte was absolutely, firmly dead. Not magically asleep, dead. Which means Sand picked up and straightened out a corpse. For a middle grade book, that feels like a slightly squeamish idea. More problematic, the chapel contains the saints’ relics, including St. Trifine’s heart. Which broke in half, and Sand glued back together again. And which starts beating.

To be fair, Haskell didn’t write either of these ideas in a way that emphasized the creepiness, and probably went out of her way to downplay that factor…but a disembodied beating heart is always going to be a little creepy! So a word of warning for the very squeamish or the very young–though in all other ways this is a very fun middle grade fantasy.

One other word of warning: I unfortunately found the last chapters slightly disappointing—just as I’m looking for an exciting confrontation, we instead have a negotiation with legal and political undertones. However, there are some nice character moments in there all the same, and in the end, justice is served in a satisfying way. It just took a little while to get there.

With a few noted reservations, I still thought the characters and the concept carried the story very well.  It’s not a perfect book (or perhaps it’s just not perfectly what I was looking for) but it is a good read!

Other reviews:
Charlotte’s Library
The Book Smugglers
Lili’s Reflections
Anyone else?

Buy it here: The Castle Behind Thorns

4 thoughts on “Book Review: The Castle Behind Thorns”