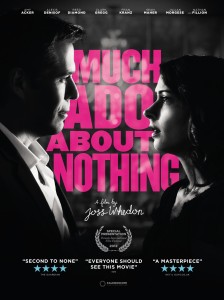 I kicked off my Shakespeare reading/viewing goals this year with Joss Whedon’s production of Much Ado About Nothing.  It’s my favorite Shakespearean comedy, and so the perfect place to start–especially since I’ve been meaning to watch this one pretty much since it came out (in 2012!)

Much Ado tells the story of Beatrice and Benedick, verbal sparring partners who are tricked by their friends into falling in love.  Meanwhile Beatrice’s cousin Hero and Benedick’s friend Claudio have fallen in love and are set to wed, but nasty Don John arranges to disrupt the match with false allegations on Hero.  Because it’s a comedy, we all know it ends with a wedding, despite the un-smooth course of true love along the way.

I actually have a theory about why it took me so long to watch this movie.  Whenever I first heard about it from someone (I forget who), I think the conversation went something like, “Joss Whedon is doing Much Ado, and Nathan Fillion is in it.”  And in the next brief pause between sentences my brain went, Nathan Fillion as Benedick–I want to see that!  Before my friend concluded, “He’s playing Dogberry.”  Who has never been a character I much enjoyed.  And I just couldn’t get the same enthusiasm for the movie after that.

However!  It was a quite good version.  Whedon set the play in the modern day (filmed at his own house, apparently) and the actors had that nice trick of delivering Shakespearean verse as though it was normal speech.  The modern setting, for me, neither added much nor distracted, which frankly is enough for me (Romeo + Juliet?  I could not cope with the Montagues and Capulets with machine guns).  Apart from one scene in a pool at the masquerade party the movie pretty much stayed away from the surreal, which is all to the good (don’t start me on the Romeo + Juliet balcony scene conducted in a pool…what is it with directors and pools?)

Alexis Denisof, despite not being Nathan Fillion, was still a good, funny Benedick, and I liked Amy Acker as Beatrice too.  They both had good comedic timing, physical humor and the ability to bring the energy down and be solemn and subtle when the moment called for it.

One of the very small moments that most stands out to me as being excellently done is when Benedick is ranting on to Leonato and Hero about how he can’t stand Beatrice, and concludes, “Speak not to me of her!”  Looong pause…and then he resumes talking about Beatrice, and Leonato and Hero grin at each other.  It’s the timing, the physical movements that aren’t in Shakespeare’s play that bring it so to life.

I found this was a good production, not ground-breaking for me.  I’m still very fond of Brannagh’s version, and David Tennant’s gulling scene remains my favorite (which you can see on YouTube!  Start with the song at about minute 50.)  But, oddly enough, the one thing that really emerged for me as especially good in this production?  Nathan Fillion as Dogberry.

He was the funniest Dogberry I’ve seen.  In fact, he might be the first one I’ve actually found funny at all, and he had me laughing out loud.  I think I’ve seen Dogberry overplayed in the past.  Fillion’s Dogberry had no idea he was funny, and delivered absurd lines with complete seriousness.  It worked beautifully.  I admit, I’m predisposed to like anything Fillion does–and it’s just funnier when a guy who looks like Richard Castle rants that he’s as “pretty a piece of flesh as any in Messina,” but it was legitimately a good rendition.

The other thing that emerged from watching this was validation of the whole reason I want to watch/read Shakespeare more consistently.  I’ve noticed this before and it happened again–if I haven’t been engaging with Shakespeare, I lose my ear for him.  It’s like an accent.  If I’m not used to it, I have to really listen hard to understand everything.  But then my brain adjusts and it gets easier.  When I was really engaging with a lot of Shakespeare in high school and college, it almost got easy.  Not every word or every line, but certainly the text overall.  When I started watching this movie, I had to really listen for the first act…and then I started adjusting and by the end it was easier.

So that’s why I want to read or watch more Shakespeare this year.  I want to keep my Shakespeare ear in practice!  And this was a good place to start.

Keeping score with the Bardathon challenge…

Buy it here: Much Ado About Nothing

One thought on “Movie Review: Much Ado About Nothing (Joss Whedon version)”