Today happens to be my birthday.  🙂  In honor of the occasion, I’ve decided to give myself over to emotive waxing on, run the risk of demonstrating a foolish attachment, and review one of my very favorite books: Susan Kay’s Phantom. 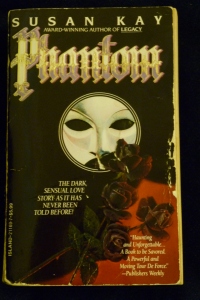 Technically it’s Phantom: The Novel of His Life by Susan Kay, but the convention is to always call it Susan Kay’s Phantom.  Maybe so that it can be put in a list with “the Claude Rains Phantom” or “the Lon Chaney Phantom” or “the Webber Phantom.”

I have a small (okay, enormous) obsession with The Phantom of the Opera.  I’m fascinated by the lead character: a brilliant musical genius who lurks in the shadows and, despite being a brilliant musical genius, is utterly convinced of his own unworthiness because he thinks he’s ugly–and by conventional standards he is, but I think the more imperative point is that he thinks he’s ugly.  I’m actually not that interested in the romance with Christine; it’s Erik, the Phantom, I’m fascinated by.  And I’m fascinated by exploring all the different versions, and how they’ve retold the plot and especially the character.  In this version he’s more arrogant–in that version he’s more shy–this version makes him more clearly a villain–that version emphasizes the romance.

And Susan Kay’s Phantom is one of the most fascinating of all the fascinating different versions.  Maybe it’s because the Christine romance is really just one part.  The book starts from before Erik’s birth and goes all the way to past his death.  With different parts of the book told by different characters, we follow the Phantom through childhood, to a gypsy freak show, to Italy where he learns from a master architect, to Persia and, finally, to the Paris Opera House.

For a long time this was out of print, and used versions averaged around $75.  So you see I’m not the only one with a considerable attachment here.  Fortunately for everyone, it’s been reprinted.

It’s beautiful, it’s tragic, it’s even funny and heartwarming at times.  The writing is amazing, rich and lush.  It reminds me a bit of Daphne du Maurier.  I feel I know all the characters personally.  There are few characters–maybe none–in fiction that I hate more than I hate Erik’s mother.  And there are few characters I’m more–here I go with that word again–fascinated by than Erik (and here I mean specifically this version).  Kay walks an amazingly fine line; he’s a very dark character, but just when he gets too dark,  something happens to make me love him again.  For example, things get bloody in Persia, and then some sweet bits turn it around again.

I found it a very emotionally intense book–not in the sense that it was a heavy subject matter, but that I was so drawn in.  And that may be the explanation for what might sound strange, after all this waxing on: I’ve only read it once.  I’ve flipped through it often–I’ve reread passages–I’ve marked all my favorite quotes–but I’ve never actually sat down and read it again.  I think it’s that I have to have a certain amount of emotional distance to a book before I feel I want to pick it up again.  If it’s too fresh, I don’t feel an urge to reread–it’s still there in my brain and there’s no reason to reread until it’s left.  And Susan Kay’s Phantom left such an impression that it’s still here in my brain.

It’s also saved the lives of a lot of spiders.  There’s a brilliant metaphor in here, relating Erik to a spider (and I so wanted to shake Christine for failing to see the connection).  Ever since reading this, I haven’t been able to bring myself to kill a spider–because “it’s not the spider’s fault that it’s ugly.”  So I’ve trapped a lot of spiders in glasses and released them into the wild instead.

I’d like to give you more quotes, but most of my favorites wouldn’t make any sense without a lot of context.  How do I explain why I melt into a puddle when Erik tells the Daroga, “Take care, mon ami.  Your tiresome health has become very dear to me.”  Or the incredible, heartbreaking power of “Please, God, let her love me and I’ll be good forever” and why I really, really want to yell at him, “No, no, don’t go up on the rooftop to pray, it’ll end badly!”

See, I knew I’d end up sounding crazy if I tried to review this book.  Here we go, one quote to demonstrate the wonderful language and convince you there’s something at the base of all this exhuberance: “My mind has touched the farthest horizons of mortal imagination and reaches ever outward to embrace infinity.  There is no knowledge beyond my comprehension, no art or skill upon this entire planet that lies beyond the mastery of my hand…  But as long as I live, no woman will ever look on me in love.”

One rational note: I seem to be straying from the young adult books this week, as this one isn’t YA either.  Probably appropriate for older young adults–things do get bloody in Persia, and there are some dark moments throughout.  The Phantom’s life is a tragic one.

10 thoughts on “A Fascination with the Phantom”