I’ve been so busy writing the last few weeks, I’ve done less reading than usual!  I have enjoyed rereading some old favorites, though, and trying a couple new books too. 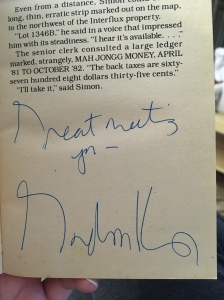 Gordon Korman was my favorite funny author of my childhood.  A couple of librarian friends tell me he’s known for survival stories now, but back in his early career he wrote some hilarious stories, including my favorite and one of the earliest reviews on this blog, A Semester in the Life of a Garbage Bag.  I recently bought one missing from my collection of his early books, Son of Interflux.  I got a used copy online, and was pretty delighted to open it and unexpectedly find a signature!  The book was also as fun and hilarious as I remembered.  In the same mold as Semester, it’s a high school setting full of kooky characters and increasingly escalating chaos.  In this case, an art school takes on a big corporation to save a forested area – but it’s not remotely as serious as that plot makes it sound. END_OF_DOCUMENT_TOKEN_TO_BE_REPLACED

I’ve been having an unexpectedly busy past month in my writing.  On my last update, I mentioned revising Thorns 2; I was focused on that until mid-April, on track to finish this particular revision pass by the end of the month.  And then very suddenly I got hit by an idea for a companion story–probably a novella.  I thought I’d just jot down a scene or two…and it completely overtook my brain.

Penelope is a minor character in Thorns 1 – she’s married to Prince Gregory, Terrence’s brother and one of the chief villains of the series.  She’s sent away from the castle halfway through the book, which was fully a plot device for Rose and Terrence’s story.  But I started to wonder about Penelope, to wonder what had become of her when she was sent away.  And once I started wondering, she took up residence in my brain, with apparently no intentions to go away until I wrote her story.

The “novella” kept getting longer, turning into a full novel.  And with Penelope more or less shouting at me (even though she doesn’t shout in the entire book), and bringing along a few new characters to join her, I ended up writing a 60,000 word first draft in three weeks.  That’s the most I’ve ever written in three weeks, and the fastest by far and away that I’ve ever completed a first novel draft.  She just really, really wanted her story told! END_OF_DOCUMENT_TOKEN_TO_BE_REPLACED

Lately I feel like I’m always on a hunt for more light-hearted books.  I’m not sure when that became a hard thing to find?  I’ve had some interesting reads in the last few weeks, but it’s been…mixed in terms of the tone!

As Old as Time by Liz Braswell sounded brilliant, a Disney-sponsored novel with a twist on their Beauty and the Beast movie (they have a whole series, in fact).  The first twist was that Belle’s mother was the enchantress who cursed the Beast, and the second twist was that Belle accidentally destroys the enchanted rose, making the curse much worse.  There were good parts to this, but…!  Too much of it was almost word for word retelling the Disney movie, and then when it diverged we somehow plunged off into an insane asylum where some seriously creepy torture is going on, which sat…very weirdly in a Disney movie-inspired book!  You don’t expect lobotomies in a Disney story!  I also thought the romance got very little attention, so that when Belle’s father eventually remarks that Belle and the Beast are “obviously” in love…it was really, really not obvious. END_OF_DOCUMENT_TOKEN_TO_BE_REPLACED

I mentioned earlier in the week that I was working on new cover designs for my Guardian of the Opera series, and today I’m excited to share the new covers with you!  The first book, Nocturne, came out almost two years ago now, and it’s fun to refresh the series a bit with a new look.  The paperback and hardback editions are keeping their original covers, but the ebook is getting a new style.

These are similar to the original covers, but they have a slightly different feel to them that I think is fun.  They still have the same key elements – Erik, Meg and the Opera Garnier – but put together a little differently.  I wanted to share the covers here first, but they’ll be live in the Kindle store shortly.

And now…here they are!

It’s beginning to look spring-like near me, and as the weather gets warmer, obviously it’s time to…settle down at the laptop for more writing!  I was very happy to meet my March goals – I finished the latest revision pass of The Princess Behind Thorns, the first in my newest series, and sent it off to beta-readers last week.  I’m putting that one on pause until I get feedback, and then I’ll do final revisions and get the story out to all of you!

For April, I’m working on the second book in the Thorns series, The Princess Beyond the Thorns.  I wrote this one for NaNoWriMo a few years ago, when I thought it was only the second half of the first book.  But it got…long.  So I have a rough first draft of Book Two already, and am working on some initial revision this month. I really enjoy this installment in the series – Terrence and Rose fell in love in Book One, but they still have some things to work out in Book Two.  Plus the attention shifts to two new villains, and the stakes get higher. END_OF_DOCUMENT_TOKEN_TO_BE_REPLACED