As another companion piece to The Graveyard Book read-along, this week we’re writing about coming of age stories.

I have to admit, I had some initial tripping-up with this topic.  But I think I’ve got my train of thought sorted out–we’ll see as I type!

When I first heard “coming of age stories” as a topic, my brain perversely went to Peter Pan–who is the complete opposite.  He’s the character who flatly refuses to come of age, ever.  However, I do think that’s one part of the story, as it leads me to the question: why does Peter choose not to grow up?

So I turn the pages to the section of the book when Wendy tries to coax Peter to stay in London with her, and I find that he balks because she would send him to school and then to an office and soon he’d be a man, to paraphrase slightly.  Well, if being a grown-up just means going to an office, by all means, fly back to Neverland, Peter!  That’s what it seems to mean for the other boys; we hear about them as adults, and the saddest is John, the bearded man who doesn’t know any stories to tell his children.  It all rather makes me wonder about J. M. Barrie’s life.

To turn this back around again, I think a key part of growing up is realizing that there’s more to being a grown-up than going to an office!  Peter wants to “always be a little boy and to have fun,” but grown-ups can have fun too.  Different fun.  It’s worth remembering, because when life does seem to revolve around going to an office (or any other humdrum parts of grown-up life, like washing dishes and paying bills), it’s easy to start thinking Peter was right.

But he wasn’t.  And he was also wrong that grown-ups can’t go to Neverland–in a metaphorical sense, of course.

To move along in that direction, let’s look at another classic children’s writer, who seemed to have a healthier view on things.  First, I quote St. Paul, who said something to the effect of, “When I became a man, I set aside the things of childhood.”  C. S. Lewis followed that up with, “And one of the things of childhood I set aside was the fear of being thought childish.”

I remember that there was a point in my life when I came to a revelation that I didn’t have to stop reading children’s books.  And that I can still go to Disneyland and ride the Peter Pan ride.  Of course, now I also have a quite different appreciation for the Pirates of the Caribbean ride, and I read books from the grown-ups section too.  But I don’t have to let go of all those children’s things if they still appeal to me.  Neverland might look different to us, but we can still get there.

Or to put it another way, growing up means a bigger library to choose from.

This puts me in mind of what actually is an example of a coming-of-age story, my much-beloved and frequently-referenced The White Darkness by Geraldine McCaughrean.  Spoilers here, so you may want to drop down a paragraph.  For new readers, The White Darkness is about Sym, a fourteen-year-old girl who creates an imaginary friend out of Lawrence “Titus” Oates, the Antarctic explorer.  She gains confidence and self-understanding through a really awful experience in Antarctica.  You could say she grows up.  In the course of that, a couple of times I was afraid she was going to have to give up Titus, as part of growing up–but she never does.  And that makes me immensely happy, possibly because of all those things I was discussing above.

On a side-note, since I brought up the book–I also have to say that I was very sad recently to hear about the death of Richard Morant, the inspiration and audiobook-voice of Titus.  I don’t actually believe in ghosts and I certainly don’t want to confuse the actor and the character…but all the same, I like musing over the idea that maybe he’s off being a supportive shoulder to some girl in great need of a friend. 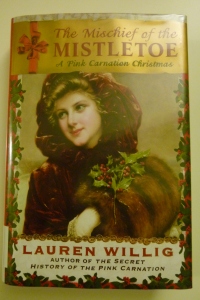 Back to the topic: another coming-of-age story that comes to mind is, oddly enough, The Mischief of the Mistletoe by Lauren Willig, who would probably be taken-aback to hear her story described that way.  It deals with two adults, Arabella and Turnip (don’t ask about the name), who fall in love while trying to untangle a spy ring.  And you ask how this relates.  But it does, more obviously for Arabella, but really both of them.  Arabella starts out as a shy, mousy wallflower, who finds herself as a strong, capable woman.  Turnip shows up in earlier books in the series, always as the buffoon everyone treats as comical and then disregards.  He stays comical, but he also emerges as having much more worth than it previously appeared.

Which brings me to what I think will be my final point–that coming-of-age stories don’t necessarily have all that much to do with age.  Or if they absolutely must, then I seem to be talking about a different sort of story, though a related one.  I think what it’s really about is figuring out who you want to be.  Not who the world says you are, or who you are when you’re afraid to be something else, but who you want to be.  Often that happens at a certain age–but not necessarily–and to some extent it never really stops happening.

To circle back around to the beginning (because he wouldn’t like dropping out of the post), perhaps that’s another reason there could never be a coming-of-age story about Peter Pan.  He is who he wants to be.  He’s the little boy endlessly having fun.

For the rest of us, who follow Sym and Arabella and Turnip to “come of age,” I think it’s worth listening to C. S. Lewis, and to keep in touch with the Peter Pan and the Titus Oates in us all.

11 thoughts on “Rambling Philosophy About Coming of Age”