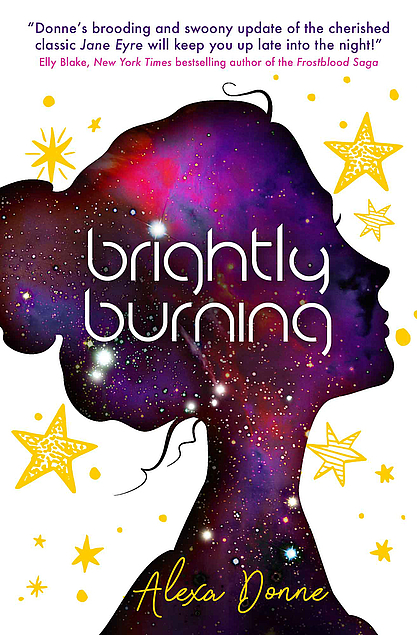 Sometimes I see a book with a premise that seems too good to be true, and then it turns out that it is.  Brightly Burning by Alexa Donne promised to be Jane Eyre – in space!  And it was, but unfortunately it wasn’t as satisfying as I hoped it would be.  I ended up having two seemingly contradictory yet both true problems – the book was too much like Jane Eyre, and then it was too different!

The story follows Stella Ainsley, trying to get off her decaying home spaceship by applying for jobs as a governess.  She ends up being offered a position on the Rochester, where she meets the brooding captain, Fairfax, and sparks fly.  But does he have a secret? (yes, of course he does!)

So the worldbuilding concept was intriguing – set a few hundred years in the future, Earth has been made uninhabitable by…no, not global warming, the opposite!  A super volcano has caused a new ice age, and humanity’s survivors have taken…not quite to the stars, but rather into orbit.  People escaped onto enormous space ships that have been orbiting the planet as a fleet ever since.  That’s an intriguing concept.  There’s still major class divisions between wealthy ships and poor ones, and Stella comes from one of the poorest.  The Rochester, on the other hand, is a tiny but very wealthy ship, so landing there seems like a dream.  Well, at first.

END_OF_DOCUMENT_TOKEN_TO_BE_REPLACED

I have a new video review for today, of two picture books I’ve been reading to my baby.  One is Have You Ever Seen a Smack of Jellyfish? by Sarah Asper-Smith, an ABC book of animals and the groups they gather in.  The second is The ABCs of D&D by Ivan Van Norman and Caleb Cleveland, a very fun one for Dungeon & Dragon fans, and fantasy fans too.  Enjoy!

Today’s Book Blogger Hop question is: Are you more likely to choose to read a book based on the synopsis, or the cover?

Definitely the synopsis!  I’ve seen some very bad covers on very good books.  Plus, I feel like there’s a trend recently for abstract covers, using symbols or even geometric shapes, which tell you next to nothing about the story.  I usually pick up a book because I’m hooked by something interesting in the premise, and it’s hard to convey “here’s a clever concept” in a cover!  I won’t say I never judge a book by its cover, but the synopsis counts for much more with me. 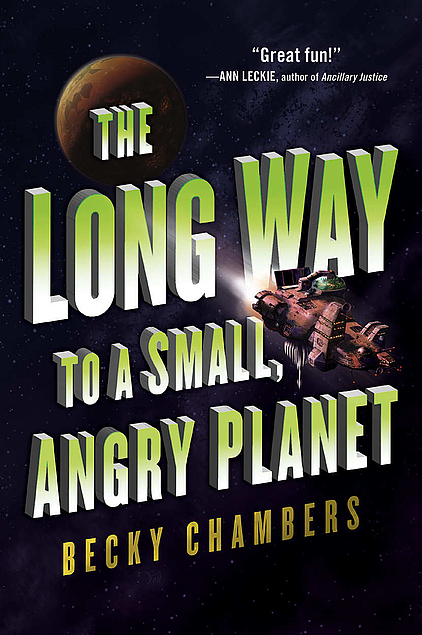 I really enjoyed the worldbuilding concept of this.  It’s as if Chambers looked at the TV trope “Humans Are Special” and decided to write a story directly counter to it.  That isn’t to say that she’s anti-human somehow, just that there’s a lot of attention paid to very interesting alien cultures, and within this galaxy those aliens (as they would!) consider their own values, culture and morality to be the norm.  They’re tolerant of each other though, including of humans, even if humans have this weird attitude about wanting to live in biological groupings and raise their own young.  It’s a big galaxy.  There’s some action in this first book (and later ones in the series) but it’s a fairly character-centered science fiction series, much more about people (of whatever alien race) and how they relate to and understand each other. END_OF_DOCUMENT_TOKEN_TO_BE_REPLACED