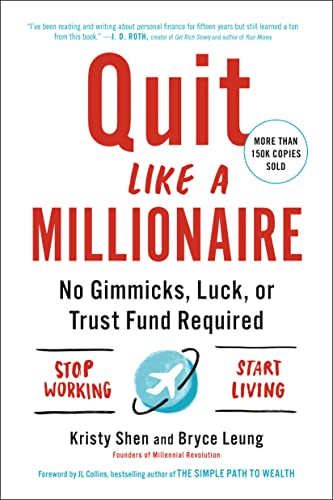 On a friend’s recommendation, I recently read Quit Like a Millionaire by Kristy Shen and Bryce Leung.  And then by coincidence, my book club picked the same book after I’d already started it, so maybe this one is a trend at the moment.  It was interesting, readable and…probably useful?

Despite the co-authors listed (who are also married), the book is told entirely from Kristy’s point of view.  That seems like the correct term, because even though it is a book of financial advice, it has a very strong personal voice, and large sections are about Kristy’s life and experience (with Bryce, eventually).  The first section is largely about her deeply impoverished childhood, first in China and eventually after emigrating to Canada.  After becoming a tech engineer and marrying Bryce, the book shifts focus into investment advice.  And ultimately, after Kristy and Bryce quit their jobs with a million dollars invested, how they secure that investment and live as retired thirty-somethings.

This is in many ways a very easy financial book to read.  Large sections read almost novel-like, and Kristy’s voice is friendly and engaging.  Perhaps predictably, there’s an inverse relationship between easy reading and usefulness.  The parts about her childhood are very readable and interesting but have limited practical application (some philosophy around placing value on money and possessions).  The parts about investing, while pretty good for chapters about, you know, investing, are tougher to decipher but much more directly relevant to the key question.

So how does one quit like a millionaire?  Well–it seems to mostly boil down to:

Kristy does offer some practical advice on all of these points, and I thought the investment advice was especially good.  It seems designed for risk-averse people (raises hand) with a lot of recommendations on weathering crashes and choosing stable-but-good-return portfolios.

#1 and #3 are more challenging.  They’re obvious, and Kristy didn’t have any silver bullet to make them easier (probably because there isn’t one).  I disagreed with her premise that you should put off your passion and sacrifice everything to earn money even at a job you hate, because…that just seems like a trap, and how much to give up along the way?  Like health, friendships, skills in the work you actually care about…  I also disagreed with her advice to rent rather than buy a house, because I’m pretty sure she threw a lot of numbers on the page but ignored the fact that you ultimately keep your principal with a house–she only ran calculations on whether you make a profit from your house appreciating in value.  Which isn’t really the point.

And the uprooting.  She had a variety of advice for protecting yourself and your money post-early retirement, but it also began to feel like a very large chunk of it was “go somewhere cheap.”  Either moving somewhere (like, Vietnam!) or just traveling continually in cheap countries (her choice).  Somewhere she asks the hypothetical question if you’d rather save money by no longer eating out, or by lying on a beach in Thailand, and it was an obviously hypothetical question.  Except I’d rather give up restaurants, because I don’t like beaches and (more importantly) I don’t like being thousands of miles from everyone I care about for more than, say, a two-week vacation.

So, now that I’ve been very negative!!  The conclusion, I think, is that if you’re willing to really transform your life, this book has good advice on how to do it and how to retire much earlier than most people.  If you’re not willing to change careers or make huge quality of life sacrifices, it still has good investment advice that may help you retire some years sooner and more securely.  And it’s not Kristy’s fault that retiring in ten or less years is just hard.  If it wasn’t, far more people would do it.

One thought on “Book Review: Quit Like a Millionaire”