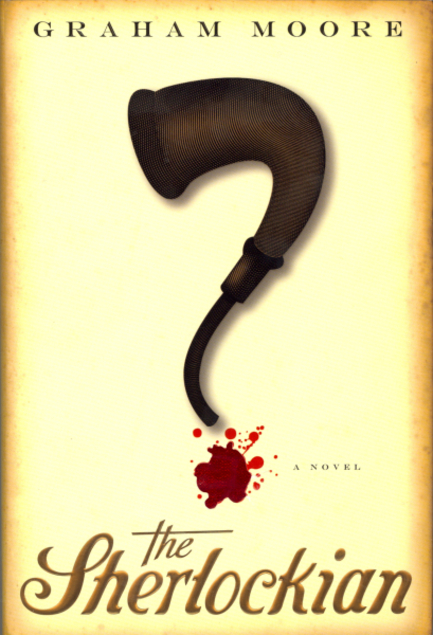 I recently stumbled into a new audiobook by accident.  I forget what book I was actually searching for in the library’s online catalog, but somehow they offered up The Sherlockian by Graham Moore instead, and it turned out to be a lucky find.

The book tells two related stories: one about Arthur Conan Doyle, creator of Sherlock Holmes, and one about a modern-day mystery involving Holmes-fans, Doyle’s missing diary, and murder.  In 1901 London, Doyle receives a letter-bomb which sends him on the hunt for a murderer of young women, and into encounters with East End slums, suffragists and the ineptitude of Scotland Yard.  He also fields repeated questions about when he’s going to bring back Sherlock Holmes, after murdering him at the Reichenbach Falls.  In the present, Doyle’s diary from this same period has been missing for a century.  When a leading Holmes scholar claims to have found it, and then turns up dead at a Baker Street Irregulars’ convention, Harold White tries to follow in the footsteps of Holmes to solve the mystery and find both the killer and the diary.

I enjoyed the split narrative aspect of this book, as we got two intriguing though very different mysteries.  They’re related, and Doyle’s story explains a few things relevant to Harold’s story, but they are essentially two different mysteries.  There’s also an interesting contrast as Harold romanticizes (with some self-awareness) Doyle’s time, and Doyle deals with the seamy underside of that same time.  Sherlock Holmes himself isn’t in either story, seeing as he’s a fictional character, but he looms large in both, as Harold’s model and Doyle’s curse.

I especially enjoyed the insights into Doyle in his part of the narrative.  In fact, this book sent me to find a biography of him, because he seems to have been a fascinating man.  Besides writing his stories, he also consulted with the Scotland Yard and knew a veritable who’s-who of interesting people from the time period (Oscar Wilde, J. M. Barrie, Bram Stoker and Harry Houdini among them).  His complicated relationship with his creation is intriguing too.  Holmes made him famous, but was never what he wanted to be famous for.  With this story set in the period of the Great Hiatus, between Holmes’ death and return, Doyle’s frustration with his character, and the way Holmes seems to eclipse him, is on full display.

Harold is a likable character to lead the present-day story, and that mystery is good too with multiple twists and turns.  Harold ends up traveling down a number of interesting rabbit holes.  The details on the Baker Street Irregulars, the leading real-life (though fictionalized here) Sherlock Holmes society were great fun too.

There was a little more gore than I really wanted in a couple of places, particularly near the end of Doyle’s story, but it was at least fairly brief.  If I have any other complaint, it’s that the end was slightly abrupt (as many mysteries tend to be).  The answers to the mystery were there, but some of the larger philosophical questions raised weren’t really answered–we know what became of Doyle’s diary but not if Harold will find new meaning now that his quest is over.  Doyle finds the murderer he hunted for, but the reason he brings Holmes back to life is more implied than ever stated.  But maybe vagueness is the very nature of philosophical answers?

This book also was fun as a very self-aware mystery.  Doyle as a writer of mysteries, and Harold as a voracious reader of them, knows how they’re supposed to go.  Both reflect on mystery writing as an art, why and how it works, and whether the mystery they’re following in “real” life conforms to the pattern.

This book is probably best for Holmes fans, but if you are one, I recommend it!

One thought on “Book Review: The Sherlockian”