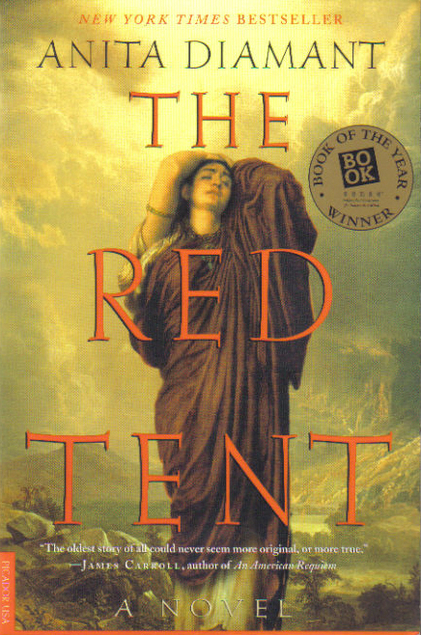 But eventually Dinah grew up, and we got to the part of her story that was in the Bible.  Sort of.  I actually do have some idea of why I didn’t read this for fifteen years–the one story about Dinah in the Bible is, at least in my copy, titled “The Rape of Dinah.”  And I didn’t want to read a novel featuring a rape of the main character.  Well…I should have asked someone about that, because (as is implied on page one, so it’s not really a spoiler) Diamant changed that part.

I can’t decide how I feel about that.  On the one hand, I appreciate that the female character was not a victim and instead had ownership of and choice about her sexuality.  And I didn’t want to read about a rape anyway.  But on the other hand–why retell a story about a Biblical (or historical, either way) character if you’re going to fundamentally alter the one story that exists about her?  A little research suggests there is some debate around whether “rape” is the right translation in the Biblical story, so Diamant may have been exploring that ambiguity to tell a different story than the traditional one.  But it still feels like it’s side-stepping to change the major story as it’s usually understood about the character you’re retelling.

The whole thing propels us into some horrific violence, and then a very sad, grim portion of the book.  Even though Dinah ultimately finds a community, purpose and happiness, somehow the book never lifted out of sadness for me.  Maybe because the nicer bits of the Bible story, like Joseph reconciling with his brothers and father, never happened, everyone (including Dinah) harboring resentment and anger and broken family ties instead.  Overall, many of the more likable Biblical characters did not come out positively in this retelling, including Jacob, Joseph, Rebecca and Isaac.

There was also a remarkable lack of religion present, for a Biblical retelling.  Jacob follows “the God of Abram” (not changed into Abraham as in the Biblical account) but that’s clearly a male thing the women have no real involvement with.  Also, following the God of Abram seems to mostly be a matter of circumcision and smashing idols, so that’s not…super inspiring.

I feel I’m being very negative here!  This book is beloved of a lot of people, including some I know, but it just wasn’t quite what I was looking for, I think.  I struggle whenever I like a premise so much more than I like its execution.  I did like the concept here and some of the ways it was explored, and I liked Dinah herself and her journey.  I’m glad I finally read this one and that I continued reading to the end to see how it would turn out–but it was surprisingly grim, for a book that didn’t even include the one dark incident I expected.

One thought on “Book Review: The Red Tent”