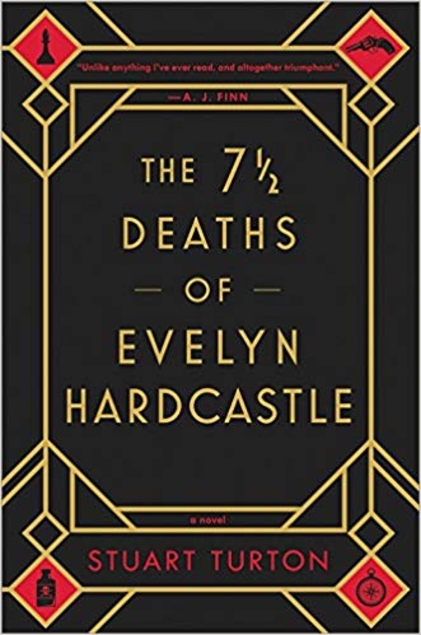 It’s not just that there’s an incredibly complicated structure going on here – it’s a convoluted mystery Adrian is trying to unravel, with Evelyn Hardcastle’s death only one of many, many mysteries in the house.  Every time he seems to be coming close to an answer, another twist is revealed.  I couldn’t put the book down because I had to know how it would finally all be explained!

It was plot and premise that mostly drove this book for me, but the characters were interesting too.  Adrian was a fine protagonist, and he has some interesting character exploration as he tries to understand who he is (lacking any memory of his time before Blackheath), and who each of his hosts are – each one, to a differing degree, impacts who Adrian is while he inhabits their bodies.  In a way, that made the character development into another mysterious puzzle.

This is a grim book, in some ways grimmer than I usually read.  Adrian is being stalked throughout by a footman determined to kill him before he solves the mystery, and there’s a fair bit in here about creeping shadows and stabbings.  There are also some chilling twists near the end.  Nothing is horrifically graphic, but there are some very dark concepts raised.  It’s also a grim book in the sense that very few of the characters seem to be nice, likable or even happy people.  Adrian seems likable enough, but most of his hosts and the people they meet are dominated by their vices and their dark secrets.  Host #7 is possibly the first really good and happy person, and it’s a bit of a relief at that point.

So the real danger in such a complex mystery is whether the final answer will be enough after all the build-up.  I’d have to say I found the conclusion both unexpected and satisfying.  Probably even worth staying up late for!

2 thoughts on “Book Review: The 7 1/2 Deaths of Evelyn Hardcastle”