I haven’t done a Fiction Friday in a while, and since I’ve been chattering on about my upcoming novel release, The Wanderers, it seemed only appropriate to share an excerpt, no?

This scene is towards the middle of the novel.  Julie, Jasper and talking cat Tom have just made a deal with a Sea Queen, which involves rescuing her sea serpent from Prince Randolph.  Jasper and Tom met Randolph on a previous adventure, and were not impressed.  Not every sentence here will make sense out of context, but I think enough is comprehensible…

Julie, Jasper and Tom exited the water abruptly.  One moment they were skimming along just above the sea floor under the power of the Sea Queen’s magic.  The next, they fell out of a wall of water to land in a heap on wet but not at all submerged sand.  Julie’s hair fell in tangles around her shoulders, and Tom shrank to a third of his former apparent size.

Julie got to her feet, wet skirt clinging to her legs, and looked around.  They were on bare sea floor, in a trench formed by walls of water rising dozens of feet above their heads on either side.  The trench was maybe a hundred feet across, and several times that long, the floor covered in mounds of sand and wilted seaweed.  At the far end, she could see the serpent coiled like an enormous snake, while Randolph stood before it with sword drawn, his back to them.

“Damn,” Jasper remarked.  “He must have a useful enchanted sword.”

“You think he used it to part the ocean?” Julie said.

“Can’t explain it any other way.  Randolph just isn’t that talented on his own.”

If Jasper was right, the sword was giving him a considerable advantage.  Julie didn’t know much about judging the health of giant sea monsters, but she thought it looked ill.  It was snapping at Randolph, but its movements were sluggish.  “It’s probably sick outside the water,” she said.  “So to rescue it, we’ll have to move it back into the sea.”

“You want to move a giant serpent?” Jasper said.  “I’ve seen buildings that were smaller.”

“All right, so maybe we don’t move it,” Julie said, keeping her chin in the air and a positive tone in her voice.  Someone had to be the optimist.  “We’ll move the water back around it.”

Jasper caught the idea and the optimism.  “We get the sword from Randolph, and if he can part water, why can’t we put it back?”

“You can’t get any wetter,” Julie said.  “Come on, let’s go steal a sword.”  END_OF_DOCUMENT_TOKEN_TO_BE_REPLACED 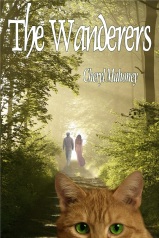 If you’ve been following the progress of my soon-to-be-published novel, then you probably already saw the cover. If you’ve been wondering just what the story (and maybe that cat) is actually about–I have finally finished writing the official blurb for the back of the book.  As a writing friend observed, that’s even harder than the novel!

Well, maybe not, but it probably did go through just as many drafts. 🙂

So today, here’s some hint of what goes on behind that cover…

The talking cat breaks Rule #18 badly enough.  The witch’s daughter, desperate to escape her horrible mother, is even worse.  Between them, they up-end Jasper’s previously simple life (when all he had to worry about was an occasional giant or dragon), and prove that sometimes, rules are no help at all.

You might recognize the countryside and you may think you know what to expect.  But whether it’s a refined ogre, a youngest son in need of lots of questing help or a very dangerous Good Fairy, things here rarely go quite as the Brothers Grimm would tell it.  You’ve strayed beyond the tales.

A very big THANK YOU to everyone who offered feedback on my cover design last week!  I wish I could follow all of your insightful advice…but since some of you contradicted each other, it’s impossible. 🙂  However, I listened and considered what everyone said, second-, third- and fourth-guessed everything, and finally landed on my final cover… 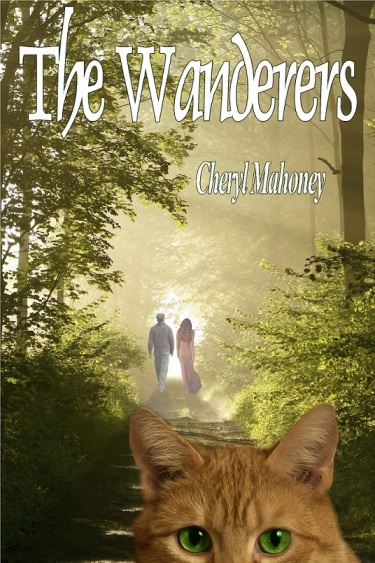 Thank you again for all your suggestions, and I’ve no doubt Tom–“the cat” of the cover–would be delighted to have been the subject of so much discussion.  Even though I’m also sure he feels no need for debate on how prominent his picture should be!

Last week I announced that in November I’m publishing my YA Fantasy novel, The Wanderers.  I also promised to share the fun parts of the process!  So far, I’ve been having lots of fun playing with images to create my cover.  I’m almost done–but I want some opinions.  I’ve already run some versions past my writing group for very helpful feedback, and now I also want to hear what you lovely readers think. 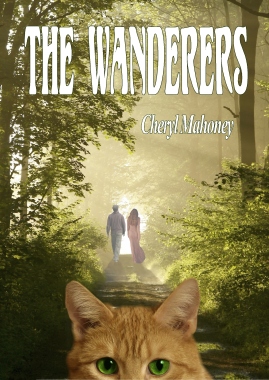 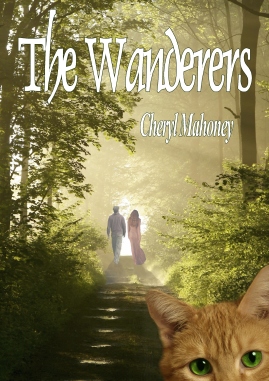 Thoughts on your preferred font?  On your preferred placement for the cat?  On anything else?  Opinions greatly appreciated!  And keep an eye on the Novel News page, where I’ll be posting the finalized cover soon.