Today’s Book Blogger Hop question is: If you were to dress up as a literary figure {author or character} for Halloween, who would it be?

I have dressed up as a literary figure–I was September from The Girl Who Circumnavigated Fairyland several years ago.  Probably long enough that I could bring it out for another Halloween!  I still have the orange dress in my closet (it’s not especially attractive, unfortunately), and I periodically wear the Coat of the Green Wind.

Lately I’ve been toying with the idea of dressing as Lyra, my lead character from The Storyteller and Her Sisters.  I have a blue cloak that would be period-appropriate, and it wouldn’t be too hard to find a blue medieval-ish dress.  And I’m sure I have a nice old book I could carry under one arm…

I’ve thought about other costumes, but the dilemma is to find a favorite character with a distinctive enough look to be recognizable–which is harder than you’d think.  Though no one recognized my September costume anyway!

Have you dressed as a literary figure?  Did people know who you were?

I have another “Imaginary Illustration” for you today, this time with a quote from The Storyteller and Her Sisters…a rather ominous quote!

This quote actually dates back to when I originally wrote this novel for NaNoWriMo 2012, and was in one of the excerpts I posted while blogging about the writing experience.  So you can read a bit more of the context in that post!

First of all, I have a bit of housekeeping to address.  Outside of the blogosphere, I’ve recently started a new day job–which is great and very exciting!  🙂  But sadly, it also gives me less time for blogging.  I’m not by any means shutting the blog down, but I do want to give a head’s-up that I may be posting less.  Probably more like 1-2 times a week, instead of my usual three.

In other news!  I’m happy to share a recent review for The Storyteller and Her Sisters, posted by fellow blogger Katy, who writes at The Library Mama.  She highlights some of the darker themes of the book…but notes that it stays light throughout.

Check out the review here.  Thanks for sharing, Katy! 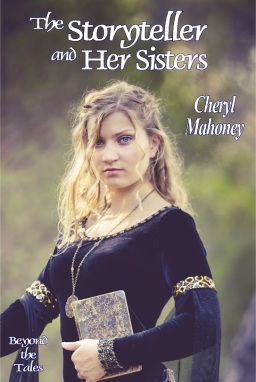 Today we’re on the final stop of my blog tour for The Storyteller and Her Sisters!  We’re closing up with another interview, this one with Christopher who blogs on Calmgrove about books, minutiae, and Arthuriana–among other things!  We also both participated in Lory’s Witch Week event, which is wrapping up today.

I’m excited about this interview, because Christopher asked some great and complex questions about the nature of fairy tale retelling, and the importance of narratives in our lives.  I only hope my answers are as good! 🙂

Find out for yourself by checking out my interview!

Another stop today on my blog tour for The Storyteller and Her Sisters!  Today you can head over to Lynn’s Book Blog for a guest post about where the idea for the novel first came from.  You’ve probably heard already that it’s based on “The Shoes That Were Danced to Pieces” from the Brothers Grimm, but there was one line in particular that set me off thinking…

Lynn is another book review blogger–I think I “met” her to during Carl’s awesome seasonal reading challenges.  And I frequently discover that I missed a cool Top Ten Tuesday topic by reading about it on Lynn’s blog!

For today, check out my guest post about Storyteller!  (And I’m pretty delighted by a very nice review Lynn posted too…)