Narnia has been coming up a lot for me lately.  I went to see The Voyage of the Dawn Treader…my book club book pick was inspired by Narnia…the series was referenced on a blog I follow…  I decided the universe was telling me something (and that book club book especially made me want to go back to the original) and I decided to re-read The Lion, the Witch and the Wardrobe by C. S. Lewis. 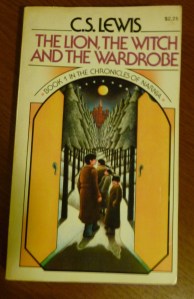 I say “re-read” because I know I read it before, but I honestly couldn’t tell you how long ago it was.  Years and years, although the story is so familiar that in some ways it doesn’t feel that long.  For those who somehow don’t know the story (side-note–I once overheard a woman tell a librarian she’d never heard of the series, so it’s possible), it’s the story of four children who go through a wardrobe and find themselves in the magical country of Narnia.  There they meet the great lion Aslan and fight an epic battle against the White Witch.

It’s a wonderful story on many levels.  It’s a lovely children’s fantasy with dashing heroes, not too much blood, magical creatures like Mr. Tumnus and Mr. and Mrs Badger, and several stern admonitions that it’s very foolish to shut oneself inside of a wardrobe (I honestly think Lewis was worried about this, he repeats it so many times).  On a more symbolic level, there’s a clear Christ story enacted.  But it works on both levels, for however you want to take it.  I’ve always thought that was the mark of the best kind of book–a good story and a good message where neither one gets in the way of the other.

I enjoyed Lewis’ style very much.  Things happen so quickly.  Lucy, the first child into Narnia, gets there by page six.  As the adventures continue, they go on at a tumblingly-quick rate.  There’s even a point where Lewis writes, of an unpleasant night journey by sledge, “This lasted longer than I could describe even if I wrote pages and pages about it.”  Thankfully, he doesn’t bother, concluding, “But I will skip on to the time when the snow had stopped and the morning had come and they were racing along in the daylight.”

C. S. Lewis and J. R. R. Tolkien were in the same writing group.  I’ve heard that Tolkien spent years and years on The Lord of the Rings, and Lewis wrote The Lion, the Witch and the Wardrobe in a matter of weeks (something that I’ve also heard annoyed Tolkien no end).  I have to say, it shows for both of them.  Different viewpoints on writing could consider that a plus or a minus to either one, but my preference would have to be with Lewis.

Lewis begins the book with a lovely dedication to his goddaughter, the real-life Lucy.  In somewhat contradiction to the story that he wrote the book in a few weeks, he says that he wrote it for her but she grew up faster than it did and she’s now too old for it, “but some day you will be old enough to start reading fairy tales again.”  Lewis clearly understood about the cross-age appeal of the best children’s stories.  We may go through an age where we think we’re too grown-up for “kids books,” but eventually we get old enough to realize we can come back to them.

St. Paul wrote, “When I became a man, I put childish ways behind me” (1 Corinthians 13:11).  C. S. Lewis added, “Including the fear of being thought childish.”  We don’t have to “think like a child or reason like a child” (paraphrasing Corinthians) to appreciate a story written for children.  We can enjoy it with new eyes, new understanding, and hopefully some of the old magic too.

8 thoughts on “Through the Wardrobe”