Last Saturday, along with being Holy Saturday, was Shakespeare’s birthday.  It’s one of the very few historical dates I know (other than “yesterday, December 7th, 1941, a date which will live in infamy.”  Oh, and Titus Oates’ birthday–March 17th.)  But Shakespeare’s birthday is one I memorized.  In college, I had a Shakespeare class that happened to meet on April 23rd.  I brought cookies.  🙂 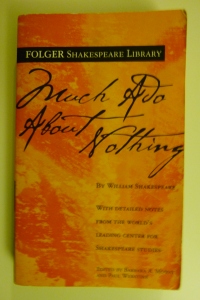 My love affair with the Bard goes back to high school, where I was a charter member of my school’s Shakespeare Society.  A lot of my best memories from high school involve Shakespeare (or Johnny Depp, but that’s another story!)  So I was definitely instrumental in my book club selecting a Shakespearean play last month.  Not solely responsible, but I was one of the ones who pushed.

Which is how I ended up rereading Much Ado About Nothing recently, and remembering why this is my favorite Shakespearean comedy.  It’s a great gateway play for people not very familiar with Mr. Shakespeare.

The story follows two romantic couples.  There are Claudio and Hero, whose romance takes a dark turn when Hero is falsely accused of wanton behaviour (and Claudio, the cad, believes it).  And there are Beatrice and Benedick, both known for their wit, who are continually baiting each other.  Their friends decide that they’d be perfect for each other, and set about on a plan to make each believe the other is madly in love with them.

My favorite scenes in the play are the gulling scenes, when each group of friends stages a conversation for the eavesdropping Beatrice or Benedick.  This preference may in part be because I performed in each of those scenes in my high school’s Shakespeare Festival.  But they really are brilliant comedy.

I was particularly noticing on this recent read-through how little Shakespeare gives in stage directions (though there is that one immortal stage direction in A Winter’s Tale: “Exit, pursued by a bear”).  It leaves a lot open to interpretation.  It doesn’t say that Benedick knocks over the potted tree he’s hiding behind at this point–but he can.

More significantly, many lines change completely by whether you believe the speaker is serious.  Was Don Pedro really proposing to Beatrice?  Are Benedick and Claudio really friends at the end?  You can go too far believing characters don’t mean what they’re saying, but there is room for reasonable interpretation–which makes the plays even richer.

If you’re at all interested in Shakespeare, try Much Ado About Nothing.  I recommend the Folger Shakespeare Library edition–good footnotes, and they put them on the facing page, which I find easier to read.  If you don’t feel up to reading Shakespeare, watch the Kenneth Brannagh version.  Excellent, although I can’t remember if he knocks any trees over.  I think I do recall some splashing about in a fountain though…

8 thoughts on “Much Ado About Shakespeare”