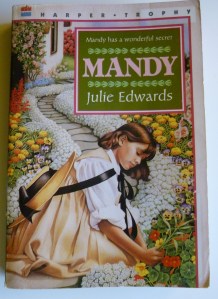 There’s something fascinating about the far side of walls.  Mandy by Julie Edwards (who’s also the actress Julie Andrews) is about what one girl finds on the other side of a wall.

Mandy is a ten-year-old orphan, who one day discovers a way through the wall at the back of the orphanage garden.  There’s a forested area on the other side of the wall, part of a large estate, and in the forest Mandy finds an abandoned cottage.  Mandy keeps the cottage a secret, and over the next several months sneaks out to it whenever she can.  She cleans the inside, plants the garden, and creates a special place for herself.  Eventually, because of the cottage, Mandy’s life is changed completely.

Mandy is a sweet character, and her story is a good one.  I think what always appealed to me most about this book, though, is the idea of the secret cottage in the woods.  I like cottages (although I read this book when I was very young, so I may like them in part because of it), and I so love the idea of the wonderful secret beyond the wall.

There’s something fascinating about doors in walls, about a valley hidden behind a hill, about open land on the other side of a creek or the country just beyond the next bend in the road.  It’s the hope that over there there will be a place that’s magical and wonderful and altogether different from over here.

One of Paul Simon’s songs has the line, “Everyone loves the sound of a train in the distance; everybody thinks it’s true.”  I don’t really know what he meant 🙂 but to me I think it’s talking about the same thing.  The train in the distance is going towards those magical lands over there, somewhere distant and exotic.

Of course, intellectually I know that if you actually go through the door or get on the train, 99 times out of 100 you won’t find anything very exciting, and over there will turn out a lot like over here.  But the feeling of the possibility persists.

And Mandy actually found something wonderful over there, and it’s wonderful to read about.

4 thoughts on “The Other Side of the Wall”