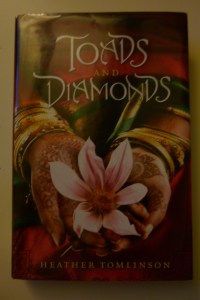 When you see a title like Toads and Diamonds on the shelf, you know you’ve found a re-told fairy tale.  I was trying to remember the title of the original–it turns out it’s usually known as “Toads and Diamonds” too (or “Diamonds and Toads”), although Perrault called it by the not at all descriptive title, “The Fairies.”

Whatever you choose to call it, the story is about two sisters (sometimes step-sisters), who each encounter a magical woman.  One sister is enchanted to drop flowers and jewels from her mouth whenever she speaks.  The other speaks, and drops toads and snakes.  Either one definitely creates a lot of opportunity for bizarre results!  I’ve read some other versions of this, and usually authors like to play with whether the enchantments are really blessings or curses.

Toads and Diamonds by Heather Tomlinson follows this trend, but does so in masterful fashion.  It follows two sisters, Diribani and Tana, who live in pre-colonial India (with some fictionalizing) and are struggling to make ends meet since their father’s death.  They’re devout followers of a fictional, polytheist religion which I think loosely resembles Hinduism.  They each encounter the goddess Naghali; Diribani begins speaking jewels, and Tana drops reptiles.

From the beginning, though, there’s a twist on the usual presentation–in their culture, certain frogs and snakes are considered lucky or even blessed.  Right from the start, it’s not so clear which sister is blessed and which is cursed.  As the story goes on, both girls find both benefits and drawbacks to their magical gifts.

I liked the character development here, as each sister comes to terms with her gift and learns about herself and her role in the world in the process.  They tell the novel in alternating chapters of limited third-person narration.  This is handled very deftly, because even though Diribani and Tana are separated for much of the book, Tomlinson keeps the two parts of the story feeling connected.  Part of that is thematically, but it’s also that each sister keeps thinking about the other, so the reader keeps being reminded of the connection.

My favorite part of this book was the atmosphere.  The Indian culture is vivid and colorful, and the details are excellently handled.  I don’t think Diribani ever speaks a jewel or a flower without a mention of what kind it is.  Potentially that could drag, but it’s not dwelled upon, just quickly described, so that you have constant images of lilies and rubies and orchids dropping past.  Tana’s snakes and frogs are described too, and we also hear about clothes, food, scents…  I love the descriptions of colors.  Rather than saying that a rug is orange and red and tan, it’s described as mango and ruby and apricot.  It brings it all much more to life, with an exotic flare.

I enjoyed seeing a familiar fairy tale put into a very different setting, especially one so vividly realized.  Highly recommended!

One thought on “Scented Flowers and Lucky Frogs” 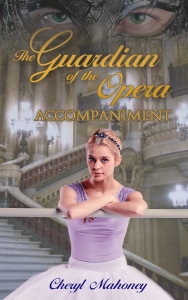