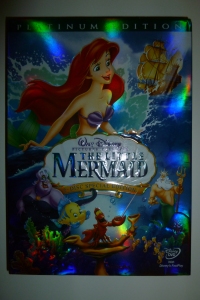 As you may have noticed, I’ve been revisiting some favorite kids’ movies lately–most recently, I went under the sea for The Little Mermaid.  Definitely one of Disney’s best!

The plot is straight-forward enough: Ariel, a mermaid princess, sells her voice to Ursula, the Sea Witch, in exchange for legs so that she can try to win the human prince she’s fallen in love with.

There could be a horrid problem here where Prince Eric clearly is only interested in her face (since she can’t talk to him!) but I actually think the movie did a pretty good job developing their relationship–you know, as much as you can in very brief time, and without any mutual dialogue.  Still, I felt like it worked.

However, I discovered that for my adult self, Ariel and Eric are of limited significance.  I like Ariel’s independent thinking, and Eric is a slightly more impressive Disney prince than most that came before him.  But…the movie’s really all about Sebastian.  The irritable, anxious, well-meaning though crusty crab sidekick totally stole the show for me.  He’s a composer too!  Did you ever notice that Sebastian gets two major songs (both nominated for Academy Awards), while Ariel only has one (plus a reprise)?  Not to mention–Sebastian’s just really funny.  Flounder and Scuttle were great too–how is that the animal sidekicks quite often end up being the best parts of animated movies?

Chef Louis is also wonderful, and clearly made a big impression on me as a kid, considering I was surprised by how little he’s actually in the movie when I watched it again.  And as a kid, I didn’t even know that he’s voiced by the same actor who played Odo in Star Trek: Deep Space 9.  My dad saw Rene Auberjonois at a Star Trek convention once, and he sang “Les Poissons” for the audience.

Aside from Sebastian and company, there were a couple of things that struck me here.  The first is one I’m sure my child-self would have understood.  I was fascinated by Ariel’s hair.  It was the way it floated when she was underwater.  All flowy and floaty and…yeah, having a girly moment, obviously.

The second thing that struck me was a very grown-up observation.  It’s nice and all that the prince got married, but at the end of the movie, the big news in the kingdom shouldn’t be the wedding, or even that she’s a former mermaid.  You know what the real news is?  Good grief, fish are intelligent!

The discovery that fish are on an intelligence-level with humans would have major ramifications.  I mean, what does this do to the fishing industry?  (Sidenote: if you look at the scene with Chef Louis from Sebastian’s point of view, and with the premise that fish are intelligent, it becomes something out of a heavy-duty slasher film.  Body parts everywhere!)  Considering Eric’s kingdom is on the coast, he could have a major economic slump on his hands if they have to give up fishing.  Though on the other hand, they have an entirely new trading partner in Triton’s kingdom, so maybe it would work out.  Plus you could expect all the marine sciences to develop at an astronomical rate.

You know I love picking fairy tales apart…but I love this movie too.  Good romantic leads, Ursula’s a fantastic villain (the tentacles–how cool are the tentacles?), great music, and of course…a funny and irritated crab!

6 thoughts on “Under the Sea”