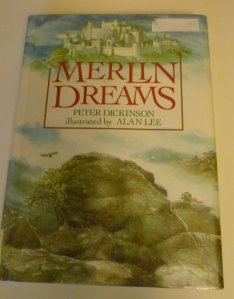 I’m fascinated by the frame story, and the short stories are excellent too.  Several have a vaguely Arthurian flare, although I don’t think any retell an actual legend.  But there are dashing (and not so dashing) knights, brave damsels and many unexpected heroes.  There’s a king, fallen from honor and strength who needs a little girl to show him the way back.  Another little girl befriends a unicorn in the woods, only to be threatened by men who want to exploit the opportunity to hunt a unicorn.  Two stories feature tricksters who put on shows for country folk they hold in contempt, only to be undone by their own tricks.  There’s a young prince who fights a dragon, and another, particularly ugly young man, who fights a sorceress.  And woven throughout, Merlin remembers his own life, and strange fragments of other scenes and stories.

There’s a wonderful magical, mystical quality to the stories.  Often all is not as it seems, and the magic holds plenty of surprises.  Even though I don’t think these are traditional stories, many have that enchanting feel to them. 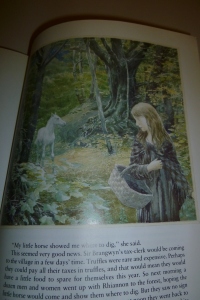 Part of it’s very much the writing.  Part of it is the illustrations too.  I honestly don’t know if there are multiple versions of this book, but if there are, make sure you get a copy with Alan Lee’s illustrations.  There are many throughout the book, some dark and shadowed, some vivid and bright.  They bring the stories to life in a new way, and many are just beautiful.

This is generally put in the kids section, and I think the short stories are definitely good for kids.  A word of warning that some of Merlin’s reflections are pretty dark.  And as beautiful as most of Alan Lee’s illustrations are, some could be disturbing for a smaller child.

There’s no Table of Contents to the book, which can be a little inconvenient at times.  But I think it fits too.  After all, it’s not just a neat line of stories.  It’s a series of dreams, and if you could line them up and list them out and easily jump to one or another, I think that would lose some of the flowing, magical quality of the book.

I can’t resist a few more pictures!  You can click on them to see them larger.

One thought on “To Sleep, Perchance to Dream”