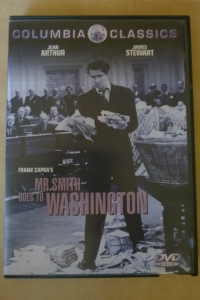 What’s your favorite patriotic movie?  I’m a big fan of 1776, but one of my favorites for the Fourth of July is Mr. Smith Goes to Washington

–even though it has nothing to do with the American revolution.

It’s an old Jimmy Stewart movie about party politics and idealism.  A governor needs someone to fill a senator seat until the next election, and is being pressured by various interest groups.  On his children’s advice and with a lucky coin toss, he ends up choosing Jefferson Smith (Stewart), the wholesome and naive head of the Boy Rangers.  In Washington, Smith is taken under the wing of established Senator Paine (Claude Rains).  Everyone figures Smith will sit quietly and cause no trouble, but when he proposes a bill to establish a boys’ camp, he inadvertantly sets events in motion that will expose Paine’s corruption, setting Paine and the political machine against him.

It’s really Smith’s wide-eyed idealism that makes this movie for me.  It’s not about the founding fathers, but Smith believes in all those principles they stand for.  You know, things like freedom and honesty and a government that works for the people.  There’s a wonderful scene when Smith first comes to Washington D.C., when he just wanders around to look at all the sights and all the monuments and is breathlessly blown away by history and meaning.

And there’s the famous filibuster scene, Smith’s last-ditch effort to fight back as the political machine turns everyone against him.  Jimmy Stewart plays exhausted desperation and sincerity very well.  He’s the perfect fit for the role throughout–he takes impossible naivety and makes you believe in it.  He’s the classic Everyman, and his Everyman is a really nice guy you’d like to know.

It doesn’t hurt to have Claude Rains in the movie either.  He forever endeared himself to me in Casablanca–come to think of it, as another corrupt government official.  Captain Renault was cheerfully corrupt and honest about it, while Senator Paine is less witty and more two-faced and devious.

It’s a classic Frank Capra movie (he also directed It’s a Wonderful Life and You Can’t Take It with You) and you know what you’re getting with Mr. Capra–idealism, strong values and warm feelings.  It’s a black-and-white movie with a black-and-white message, and even though I think life and certainly politics have a lot more gray most of the time, it is nice to celebrate the holiday visiting Capra’s idealized world.

And then, of course, to set off some fireworks.  How will you be celebrating the Fourth of July?

Other reviews:
Great Old Movies
Cinema 1001
Anyone else?

7 thoughts on “Celebrate the Fourth with Mr. Smith in Washington”