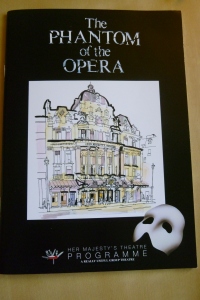 Last week I did a theatre review of Les Miserables in London.  This week, I’m sharing about my trip to see Phantom of the Opera.

Seeing Phantom for me is different than seeing any other play, because I’ve seen it so many times.  I never just watch; I analyze and compare.  I’m convinced that this is really the strength of live theatre, because I swear it’s a different play every time.  I admit this may in part be me reading into things…but since I always look for the same interpretation (because I have my own ideas for the characters), if it was all in my head, it wouldn’t come out different every time!

Counting the filmed 25th anniversary performance, I’ve seen seven performances by six different Phantoms, and I’ve yet to be bored.  I saw the play for the first time on my previous trip to London, and that’s still the best performance I ever saw (though I admit the new-ness may have been a factor).  With that in mind, I was excited to see it in London again.  And it turned out to be one of the more complex and unique performances I’ve seen–which makes this review half an exploration of different interpretations of the play.

I assume everyone roughly knows the plot: the Phantom is a musical genius living below the Paris Opera House, hiding a facial deformity behind a mask.  He falls in love with soprano Christine Daae, and clashes with the management of the Opera and Christine’s childhood sweetheart, Raoul, the Vicomte de Chagny.  The Andrew Lloyd Webber musical is one of the best-known versions of the story–and the musical is wonderful.

I got to the theatre early, as I always do.  My seat wasn’t as good as I had for Les Mis, but it’s another small theatre, so even though I was back pretty far, that was still only the twelfth row.  Although I did spend an inordinate amount of pre-show time wondering if the overhanging balcony would block my view of the Phantom on the rooftop (it didn’t, at least not badly).  This is what comes of seeing a play seven times–you think about these things.

The Phantom was played by Marcus Lovett, and it struck me as a very different performance.  First, his voice didn’t sound like other Phantoms I’ve heard.  I’m not musical enough to know the proper terms to describe it–good singing, certainly, but sort of deeper and broader somehow, with an element of thunder.  It made me wonder in the early scenes how he was going to handle “Music of the Night,” which absolutely must be sung intimately.  For me, Phantom performances live and die by that song.

Lovett ended up carrying the song fine–but it was different.  This was the first time I’ve seen a Webber Phantom who didn’t really seem to be in love with Christine.  The crazy thing is, the interpretation seemed to work (mostly).  I’ve always thought the Phantom was making a mistake falling in love with Christine, but I’ve also always believed that he deeply, passionately loved her.  This one didn’t seem to.  His real interest was the music.  It was the first time I believed a Webber Phantom when he said he had brought Christine below the Opera House to sing.

When you jump from that idea, “Music of the Night” isn’t a seduction at all, it’s a celebration of the music.  It’s all about, come see the night and experience my music.  Of course, some lines like “only then can you belong to me” are pretty unambiguous, but it still felt like that was his secondary, possibly long-range idea.  All he really wanted was for her to be a part of his music, and I don’t think he’d object if it became something else…but that’s not the primary goal.  After all, the last line of the song is not “I love you,” it’s “Help me make the music of the night.”  Which can obviously be metaphorical…but in this performance, it felt literal.

That interpretation kept working for the rest of Act One.  In the morning, after “Music of the Night,” the Phantom’s not mooning over Christine, he’s having a perfectly delightful time writing his music.  After she yanks the mask off, he has a meltdown and then starts singing about his longings–for heaven and for beauty.  It never actually specifies how she fits into that picture.  There is the one line, “fear can turn to love,” but it almost feels like an add-on.  The entire sequence with his disruption of “Il Muto” is all about making the performance of the music better.  On the rooftop, does the Phantom feel betrayed because Christine and Raoul kissed, or because she said nasty things about his face and is planning to run away and not sing anymore?  The ultimate line about the Phantom’s betrayal is not “I gave you my heart,” it’s “I gave you my music.”

So obviously I was having a wonderful time watching all of this–and analyzing.  But then the interpretation falters a bit in Act Two.  I started to lose the thread of the Phantom’s motivations.  The more I think about it, mostly it should work–he’s still focused on Christine’s singing at the Masquerade, and on being the Angel of Music at the graveyard.  It wasn’t coming across as clearly, though, and then I don’t know at all what to do with “Point of No Return,” most especially the Phantom’s “All I Ask of You” reprise, or parts of the finale.  Which are all kind of important.  I still think it’s an interpretation with value, though–because it works for so much of the play.

Christine had similar across-act issues at the performance I saw.  I swear, in Act One she was a schemer.  Disclosure: I want Christine to be a schemer.  She’s that or an idiot, and I like the idea that she’s plotting.  But I don’t think it was all in my head either.  She was a little too gleeful yanking the Phantom’s mask off, and she was definitely playing Raoul on the rooftop.  The lines are there, and the way they were being delivered–I was convinced she was manipulating him.  (I’ve always thought that “order your fine horses” is not an appropriate response to “Christine, I love you” in that scene).

But then we came back from the interval, and Christine spent all of Act Two terrified, and I just didn’t know how reconcile that.  Christine can absolutely be weaving plots in Act Two (a secret engagement?  really?), but this Christine just seemed too frightened.  There was a very strange moment in “Point of No Return” when Christine and the Phantom are struggling, and I honestly couldn’t tell who was trying to get away from whom.  I know that seems like it should be obvious, but with Act One’s portrayal of the characters, it really wasn’t.

So I found the characters brilliantly different in Act One, but then mostly reverted to something more standard in Act Two.  That was a bit disappointing, though it was still very effective portrayals as the play went on.  Just a little inconsistent.

On to other characters…my favorite, after the Phantom, is Meg Giry.  I make a habit of watching her during production numbers.  This was the most social Meg I can remember seeing.  She was talking to people in the background of several scenes, like the opening sequence, or “Masquerade.”  I really wanted to know what she was saying!  Unfortunately, my lip-reading is not that good.  An odd moment in the “Finale”…she did come across as smarter than Raoul, but they dropped the line when she tries to go with them below (and I love that line!  It’s important!)

Raoul made almost no impression on me, I think because I was so distracted by Christine and the Phantom.  There was an unusually angry Raoul in the recent 25th anniversary performance, and I wondered if that was a new standard in London, but it doesn’t seem to be.

The managers had good comedic timing, as did Piangi and Carlotta.  Piangi was obviously wearing padding and Carlotta wasn’t old enough, but their acting was good.  And Piangi struggled mightily to get on his elephant in the opening scene, which is always my favorite moment for him.

The music is always wonderful, the singing and the orchestrations, and the costumes are splendid and elaborate.  Don’t watch the chandelier rise at the beginning because you’ll be blinded–and it always falls with wonderful drama at the end of Act One.  If you’re in London or anywhere else where Phantom is playing, I highly recommend it–as I suspect will come as no surprise to anyone!  I know I had a wonderful time watching Phantom for the seventh time.

10 thoughts on “Phantom at Her Majesty’s Theatre”