You may recall that I wrote a Very Long Review of my theatre experience with Les Miserables.  So perhaps you’ve been expecting a review of the movie, which just opened on Christmas.  I went to see it this weekend, thoroughly enjoyed it, and yet also have…complicated feelings.  Hopefully a review will help me unpack this.  So here we go–and there will be spoilers, because you can’t talk about anything important in Les Mis without spoilers.

Very brief and abbreviated plotline, in case you need some context as we go forward: Jean Valjean (Hugh Jackman) is an ex-convict, arrested for stealing a loaf of bread, who attempts to remake his life–which involves running out on his parole.  He’s perpetually hunted by Inspector Javert (Russell Crowe), who believes that criminals never change and it’s his duty to bring Valjean to justice.  Valjean’s path crosses with Fantine (Anne Hathaway), who is driven to prostitution to provide for her daughter, Cosette, who’s being raised by the truly horrible yet comical innkeepers, the Thenardiers (Helena Bonham Carter and Sacha Baron Cohen).  Valjean ends up taking care of Cosette.  When she grows up, Cosette (Amanda Seyfried) falls in love with Marius (Eddie Remayne), a revolutionary whose friends are at the heart of an uprising in Paris.  My favorite characters are on their own sideplots: Eponine (Samantha Barks), the Thenardiers’ daughter, who also falls in love with Marius; and Gavroche (Daniel Huttlestone), a street urchin in the middle of the revolution.

So that was the brief overview.  It’s a long movie!  But so much happens and it’s all carried along with such wonderful songs that it really didn’t feel very long.  Hobbit is only about ten minutes longer, but felt much longer.

A few general comments before I get into the depths of the characters–this is an intense movie, and they did not skimp when it came to intense make-up.  And by that, I mean that they must have gone through barrels of dirt.  There is a long series of poverty-stricken, devastated or ill people, and they brought it all intensely to life with make-up and costumes.  Almost every actor looks horrible at some point–and that’s exactly how it should be.

And the soundtrack–the songs are amazing.  Period.  I could tell you about how wonderful each one is as we go along, but let’s just assume they’re all amazing and leave it at that.

Now, let’s dig into the characters.  There are some very surprising names in the cast here, but I thought the actors all did wonderful jobs.  Hugh Jackman carries the biggest burden of this movie, and he absolutely lived up to it.  The singing was excellent, there are intense moments, and he played a deep, conflicted Valjean.

Russell Crowe was more surprising–who knew he could sing?  But he can!  I would have liked him to let loose a little more in some of the songs, but he was wonderful in “Confrontation” and the suicide scene.  Though the best Javert, jaw-drop-that’s-brilliant, moment was when he sings “Stars” walking on the very edge of a ledge.  Foreshadowing, much?

Anne Hathaway was maybe the most surprising.  I’ve seen her in dramatic roles, but she’s still mostly the light character, frequently the ugly duckling.  She went the other way here, as Fantine spirals downward.  They don’t skimp on the anguish and she delivers an incredibly intense performance.

This may be the moment to talk about “I Dreamed a Dream,” and some of my complicated feelings.  You’ve probably heard it in the previews and it’s very emotional in the movie as well.  I don’t have any reservations about Hathaway’s singing or acting–but I hated the camera angle.  That sounds silly…but almost the entire song is a close-up on Fantine’s face and shoulders.  Trying to carry an audience for four minutes on that shot…I don’t know, I wanted body movement, I wanted walking around, I wanted Fantine walking through the mess and the whores and the disaster that her life has become.  A stage actress can stand in one place and sing.  A movie gives you more opportunities, and I think they could have done more with it…not to say that it wasn’t breath-taking anyway. 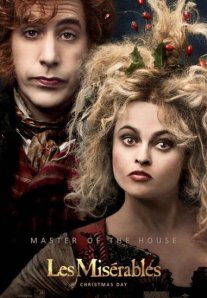 Moving along through the plotline…the Thernardiers were wonderful.  I completely forgot Helena Bonham Carter was in this, so I was delighted to see her.  She and Cohen felt like escapees from Sweeney Todd, with their high hilarity in the middle of this intensely dark movie.  They weren’t jarring, though, just a very different element in the mix.  They were quite nasty in spots, but mostly enormous fun.

Cosette I actually liked a bit better than I did in the play.  Her first song as an adult is about how she has these questions about her father, and is trying to figure things out, and something about it made me feel like she had a little more spunk than usual.

On to the revolutionaries…I didn’t like Marius, but I never like Marius, so that was not surprising.  I was a little baffled, in that they cast kind of a goofy-looking actor, and Marius’ usual good looks are most of what he has going for him.  He delivered an excellent “Empty Chairs at Empty Tables” though, and I believed in his revolutionary fervor much more than I did in the stage version.  There’s a couple added bits that made me actually believe he had more depth than a rich student who was slumming.

I loved Enjolras, also not surprising.  He’s the leader of the revolutionaries and he was just wonderful.  Fervent, dedicated, everything I wanted him to be.  I have to say, though, that he dies better in the stage play–and here’s another of my complicated feelings.

The revolutionaries flee the barricade at the very end, and there’s this wonderful, heartbreaking moment when they hammer on the doors of the people nearby, the people of Paris who they rose up to defend, and no one lets them in.  Heartbreaking.  But then they ultimately die in the upper room of the inn–which is good for Marius’ later song, but somehow not as meaningful as everyone falling on the barricade.  I loved Enjolras and another revolutionary standing together as the soldiers fire, and they did have Enjolras fall holding his banner.  Love that.  But in the stageplay, there’s a long, aching moment as he lays across the barricade with his flag.  The movie had a moment but it was too fast.

I actually don’t know the name of my other favorite revolutionary.  Beedrill, maybe you can help me out here?  I’m sure you know it!  One of the revolutionaries is the closest with Gavroche, and he didn’t get a lot of screentime earlier, but he looks so horrified when Gavroche crawls out in front of the barricade.  Wonderful.

Which leads me to Gavroche.  Love him.  Excellent singing, and exactly the cheeky, devil-may-care, never-say-die character I wanted.  They did a beautiful lead-in to his last scene.  The revolutionaries’ resolve is faltering, and then you hear Gavroche pick up “Do You Hear the People Sing?” again, and they go on.  And then he sneaks out to pick up ammunition from the fallen soldiers, and is singing his defiant song…and it’s so sad.

And I come finally to my favorite character.  I love Eponine’s character in the play, and I thought the actress was excellent.  I love that she puts on men’s clothing and comes out to join the revolutionaries.  But they did muddle her story a bit.  It’s in the details–in the play, she’s delivering messages between Marius (who she’s in love with!) and Cosette (who he’s in love with).  And it’s so selfless and tragic.  In the movie, she hides a letter from him.  I so don’t like that change.  She does die to protect Marius–he’s not worth it, but I like that they gave her that moment of sacrifice.  But rather like Enjolras, I thought they moved on too quickly.

And I have more complicated feelings about “On My Own.”  Like Fantine’s song, the actress was excellent, the singing was excellent (though I still prefer Danielle Hope’s version).  But the camera angle!  It’s almost entirely a headshot, and I don’t understand that choice.  She’s singing about walking around in the night and imagining Marius with her.  I want a scene of her walking around Paris!  Also, putting it in the pouring rain…it takes a tragic, heartfelt scene and makes it melodramatic.  It’s dramatic enough already on a dry stage.

So let’s see…I’ve been through the characters and most of the plot, anything I’m missing…?  Colm Wilkinson!  I saw his name on the credits and had to look up who he played–the Bishop.  He originated Valjean on stage, and I so love that he had a role here.  And it brings a whole different sublayer to it when Vajean dies and sees the Bishop welcoming him.

Which brings me nicely to the end of the movie.  Here they really took advantage of being a movie.  The play is so moving when all the characters who had died line up on the stage to reprise “Do You Hear the People Sing?”  In the movie, they sweep out over Paris and you see this enormous crowd lined up with their banners, and we zoom in for close-ups on individual characters.  Eponine’s smile and Gavroche’s big cheeky grin just made me want to cry after watching their deaths.  The singing is heartfelt…such a glorious ending.  And I didn’t feel like the play was asking me to be consoled by the happy ending for Marius and Cosette (which never worked for me).  The consolation is that the ideals everyone died for will rise again.

So.  I loved the acting, I loved the singing, there were many important moments that were good but frustratingly I thought could have been better.  But it was still intense, deeply moving, and I feel a little better about my complicated feelings now that I’ve written them out.

And I am so looking forward to seeing this play again in a few months when the touring company comes to town!