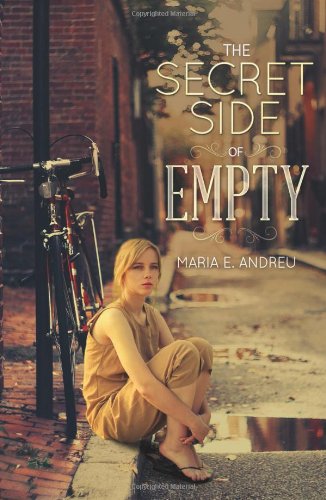 Life seems to be perfect for M. T. in her senior year of high school–she’s a straight-A student who enjoys her classes, she has a great best friend she’s known since childhood, and there’s a cute boy interested in her.  But M. T. has a secret.  Her family is from Argentina, and they came into the United States illegally when M. T. was six.  As high school graduation approaches, M. T. feels trapped with no future–unable to go on to college, get a job, or even get a driver’s license.  With well-meaning pressure from friends, trouble at home, and a dearth of options, M. T.’s life begins to unravel.

The Secret Side of Empty by Maria E. Andreu was a departure from my typical fantasy and sci fi, but it’s about a real life situation I’m particularly drawn to.  My mom is an immigration attorney, so while I’m no expert myself, I’ve absorbed a fair bit on the subject.  M. T.’s story felt tragically real to me, a very accurate picture of the situation illegal immigrants can find themselves in.

This book deals with a lot of heavy issues.  The immigration is the core, but there are also boyfriend and academic problems, and the more serious topics of domestic abuse and suicide.  In some ways this is a huge amount for one book, but Andreu balances it very deftly by keeping everything circling around the immigration issue.  M. T.’s trapped feelings prompt her academic problems, and her father’s trapped feelings prompt the domestic abuse.  That escalates in part because M. T. and her mother are afraid to call the police…because they expect they would be deported.

M. T.’s narration of the story provides a strong, natural-sounding voice that contributes to making such a heavy book work so well.  The subject matter is heavy but the writing isn’t dense, and while the topics are hard, the reading itself is easy.  M. T.’s voice propels us through the story.

I wasn’t surprised when I got to the author’s note at the end of the book and Andreu explained that she grew up as an illegal immigrant too.  This is clearly a deeply personal, very real book.  I’m glad to know that her immigration story had a happy ending–and I’m glad she ended M. T.’s story on a hopeful note too!

Buy it here: The Secret Side of Empty

Disclaimer: I received an advance copy of this novel in exchange for an honest review.

2 thoughts on “The Secret Side of Empty by Maria E. Andreu”