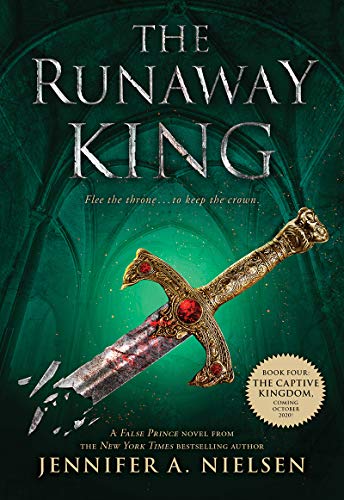 I had an excellent time reading The False Prince by Jennifer A. Neilson, so I went very quickly on to the rest of the Ascendance Trilogy: The Runaway King and The Shadow Throne. This continued to be a very entertaining series—although the trilogy developed a few issues too. Unavoidable spoilers ahead for the first book!

Book 2 opens with Jaron (Sage) trying to convince his council and his country of his fitness to rule, while neighboring countries are rumbling about war. One of the most immediate threats is from a band of pirates who are allied with an enemy nation. Jaron sets out in disguise to infiltrate the pirates, and to find an old enemy.

The story is exciting, and there are enough twists and turns and obstacles (some Jaron anticipated, and others not) to keep the pace going. Some characters from the previous book return and grow in complexity, including Imogen (the girl Jaron cares for) and Amarinda (the princess he’s betrothed to).

A few new characters also appear, like Fink, an orphan boy Jaron feels a certain kinship with—although their interaction mostly revolves around snarking at each other. I also appreciated one of the few really good characters we’ve seen in this series…whose name I cannot for the life of me remember!  Or find online, and I sent the books back to the library.  He’s a kind of father-figure for Jaron, someone who’s read the book please remind me of his name! 🙂

The chief thing that kept this good book from being a great one was that I never quite believed the premise. Jaron is dealing with country-size problems, and still trying to confront them as an individual—even though he’s a king now. Something about it just didn’t sit quite right, so while I enjoyed where the premise took us, I had to suspend some disbelief too. 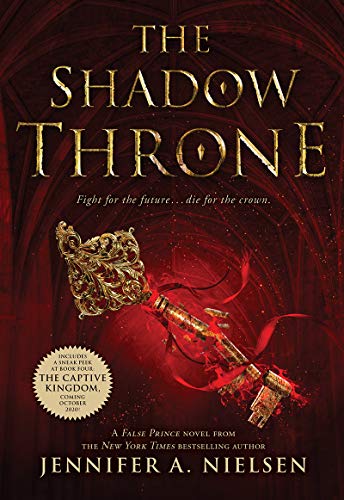 In the third book, threatened war has actually broken out. Jaron leads more than one battle front and is captured by an enemy king (twice) before finally bringing the war and the trilogy to a climax at the estate the first book centered around (nice bit of symmetry on that one).

This had the same strengths and weaknesses of the second book—exciting adventures, strong characters, and a questionable premise with regards to how Jaron runs his country and war. The country-wide scope of the war sat uneasily next to Jaron’s tendency to act as a lone agent, and to rearrange battle plans in an effort to protect individuals he particularly cares about—which makes sense emotionally but not strategically or politically.

This book also ran afoul of the hazard of leading readers to expect twists (we might call it the M. Night Shyamalan effect…) When readers watch for twists, it’s hard to pull off a surprise, but if there isn’t a twist, it feels disappointing. This one had a couple twists I fully saw coming, and one that was so untelegraphed that it felt a little random when it finally came together.

On the whole, I think these books ran into a different hazard caused by a really amazing first book in a trilogy—it sets the bar high! Setting that aside, these were very good, very engaging books…just not quite on a level with the first one! And after all, some trilogies have done much, much worse than that… 🙂

Other reviews:
The Book Smugglers
Loving the Language of Literacy
One Book at a Time
Anyone else?

Buy it here: The Runaway King

and The Shadow Throne