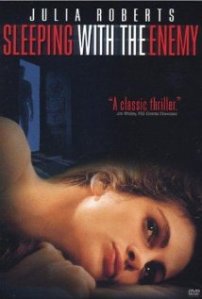 I have a regular movie night with some friends, and have encountered a lot wonderful movies that way. The most recent is Sleeping with the Enemy, an excellent but intense 1991 movie starring Julia Roberts.

Roberts plays Laura, a young woman trapped in an abusive marriage. She manages to escape and begin a new life—but it becomes quickly apparent that her husband Martin (Patrick Burgen) is on her trail.

Short plot summary, because I don’t want to give too much away! But also because it really is a simple plot, though a powerful one. This movie reminds me very much of Hitchcock, in that much of it is ordinary life…but with a deeply dangerous undertone. There’s brief violence and brief sex that are more overt than you’d be likely to see in Hitchcock, but the overall feel of the movie is very Hitchcockian.

Like the best Hitchcock, part of the brilliance of the movie is in the tiny details. Laura’s husband Martin is obsessive about order—all the towels lined up, all the labels on the cans facing the same way. This detail threads through the movie, from the early scenes depicting the abusive relationship, to after Laura’s escape when she takes obvious pleasure in rumpling up her towels, to when a mysteriously straightened towel on her rack becomes a sign of terror.

I was very impressed by Julia Roberts—she was so young in this one (twenty-four!) and gives such a brilliant performance. I think I’ve mostly seen her in chick flicks, but she was excellent here in a dramatic role. Laura doesn’t trust anyone so she has no one to talk to, and so much is conveyed by facial expressions, posture, or nuances of speech.

I’m also impressed by Jerry Goldsmith, who did the music. Martin has some very creepy music that tends to accompany his scenes as he hunts for Laura, and it builds the tension and atmosphere. In a few places we don’t even see him, but we know he’s watching because of the music. Creepy! And as my friend pointed out, it would be awfully convenient in life if dangerous people actually came with creepy theme music, so you could spot them!

I won’t give away the ending, but I will say that it was very tense and very satisfying. Unlike a lot of the books I review, this movie’s not suitable for kids, but very much recommended.

Buy it here: Sleeping With the Enemy

2 thoughts on “Movie Review: Sleeping with the Enemy”