I’ve rarely seen an author who explores characters’ emotions as well as Cynthia Voigt.  I keep meaning to seek out new books by her, but for now, I’m rereading my way through the Tillerman Cycle.  I’ve reviewed my favorite before, A Solitary Blue (technically #3 but largely stand-alone) and today I’m looking at 1 and 2.

Homecoming begins when Liza Tillerman leaves her children in a mall parking lot, telling the three younger ones to mind Dicey, the oldest at 13.  They wait in their car overnight, but when their mother doesn’t return, Dicey decides they must walk some sixty miles to find an aunt, the only relative they know of.

This is the most plot-focused book in the series, a kind of modern (well, 1980s) quest through New England.  Dicey must be scrappy and resourceful to keep her family safe and fed, picking up loose change or odd jobs, and camping in parks or on beaches.  Voigt brings a great deal of detail and realism to the journey, exploring how each new obstacle can be overcome.  The challenges are real–a few times they run out of money and can’t eat, there’s at least one stranger intending them harm–but this doesn’t become a traumatic story.  It’s about survival and perseverance.

And of course it’s about the characters.  Dicey is the chief one, fiercely stubborn and independent, level-headed and practical.  She’s deeply loyal to her family, and wary of anyone outside it.  Next oldest is James, 10, the scholar of the family, more interested in abstract knowledge than practical concerns.  Then Maybeth, 7, sweet and musically gifted but painfully shy and slow in school.  And finally Sammy, already too stubborn and angry for his six years.

I think I like that this book walks a careful line in what kind of trauma it explores.  There’s a lot of writing about PTSD, survivors of assault, and other very serious trauma.  Homecoming doesn’t go that far, so instead it looks at children experiencing a different level of crisis.  The parental abandonment is the obvious point, but it also explores poverty and living with an outcast status prior to the book’s events.  All this affects every child, but in different ways.  But all four (and especially Dicey) would absolutely fiercely resent anything like pity, and the book doesn’t give that feeling.  The tone of the story is always about struggling forward, never about falling apart (I’m looking at you, Katniss), 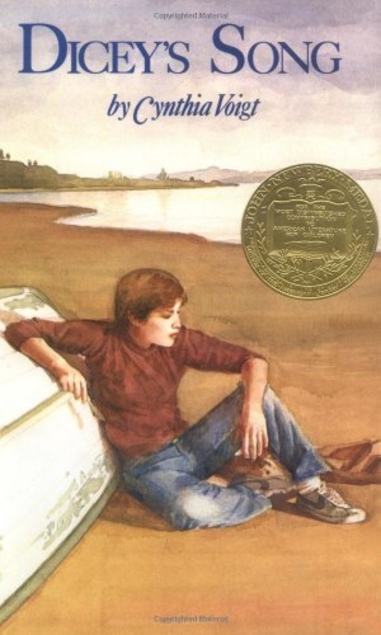 All these character issues become more of a central focus in the sequel, Dicey’s Song.  Spoiler for the first book…the Tillermans find a new home with their grandmother, and this second book opens as they try to settle into a new life.  Gram is a lot like Dicey, fierce and stubborn and independent.  It becomes clear she cares deeply for her grandchildren, but she’s not about hugs and warm declarations.

Dicey’s Song is much more the pattern of the other books of the series, focused on character rather than plot.  There are some plot threads, about challenges at school or within the family, but everything is rooted completely in the characters, particularly Dicey.

Dicey fascinated me in this book, I think in part because I read Clariel recently.  In some ways the two protagonists have qualities in common, but I could understand Dicey while I struggled to relate to Clariel.  Dicey is independent to a fault, absolutely determined that she doesn’t need anyone’s help, and nobody better ever think she needs help or wants approval or liking.  But, while I couldn’t fathom Clariel’s total disinterest in anyone, I feel like I can see how Dicey uses this as a defense, because too many people have let her down.  And her loner status is balanced by her strong connections to her family–so she’s not without people, she’s just closed off to outsiders.  That’s a character I can get interested in, and want to watch her grow and learn more about herself.

We also learn more of Dicey’s mother’s story in this book.  I still don’t think pity is quite appropriate, but there’s certainly a lot of sadness and compassion.

Dicey’s Song also featured Jeff from A Solitary Blue in a supporting role, and I loved seeing him from the outside.  He has a wonderful serenity and self-sufficiency (not the same as Dicey’s loner independence) that’s all the more appealing because his book shows how he reached that point.

I find that the Tillerman Cycle are books that have weight, without being heavy.  And there’s sadness, even though they aren’t sad books.  If that makes any sense!  I wholeheartedly recommend the first three, and I plan to go on to reread the others too.

Other reviews:
Teen Ink
The Orange Swan Review
I found surprisingly few…did I miss yours?