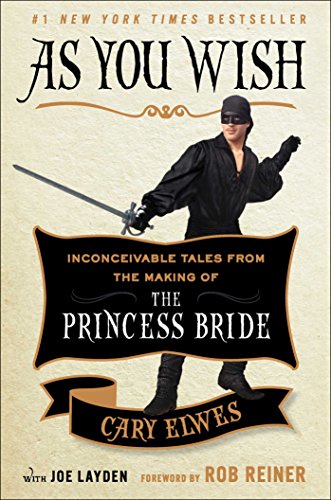 Only occasionally do I read a book and start telling all my friends they should read it too–but this was one of those times.  Though really, you should all listen to it: the audiobook of As You Wish: Inconceivable Tales from the Making of The Princess Bride by Cary Elwes and Joe Layden.  Because Cary Elwes reads the audio, and it’s an utter delight.

The Princess Bride ranks high on my list of favorite movies as a nearly perfect one (more on that in a bit).  The book is enormous fun too, and this look behind the scenes at the making of the movie just adds to it all.  Cary (and after listening to this, you’ll start calling him Cary too) takes us through the challenges of bringing the screenplay to production, how he got involved in the project and why he was especially excited (having loved the book as a kid), inside stories of excitement and mishaps in the filming, stories about every major figure involved, and what the impact has been on all their lives.

If you believe Cary, the cast and crew of The Princess Bride are the most wonderful, talented people you could ever meet, and the filming was just about the most fun you could ever have.  I’m just cynical enough to suspect some gloss here, as he gets downright effusive at times, but I’m optimistic enough to believe it’s, oh, 95% true.  You can see it when you watch the movie: they are enormously talented, and they really look like they’re having a wonderful time.

I loved the stories of what went on behind the scenes, the insights that will bring more to the movie when I watch it.  Cary and Mandy Patinkin really learned how to fence for the famous duel, and did it all themselves (acrobatic flips aside).  The funny thing was, I watched a TV show with a sword fight while I was listening to the audiobook, and I could see that they were faking it–the choreography was so-so, and the angles enabled stunt doubles.

There are wonderful stories in here about the cast and crew.  William Goldman (author and screenwriter) was fantastically nervous because he loved the story so much.  Billy Crystal is hugely funny (of course).  And there are endless stories about Andre the Giant, who seems to have defined the term “gentle giant” while being very funny too.

One thing in here that broke my brain a little–Cary was twenty-three when they filmed.  Twenty-three.  I guess that makes sense if I stop to think about it, but I’m still not sure I can get my brain around the idea that I’m six years older than Dread Pirate Roberts!!

Cary also provided some insight for me on why this is a nearly perfect movie.  The one problem in the whole thing for me has been Buttercup.  She’s not terrible.  She’s just not wonderful in an otherwise wonderful movie.  Part of the problem is that the storyline forces her into a victim role, but if you really look at her actions, she’s an active person who keeps being thwarted.  She jumps overboard while kidnapped, pushes the Man in Black off a cliff, decides to surrender in order to save Westley, makes the impossible decision to kill herself rather than be married to Humperdink.  None of those actions exactly work out, but she’s really trying, so lack of action isn’t quite the problem.  But as Cary pointed out, she never gets to be funny.  Plus, in a script that is eminently, incredibly quotable, Buttercup doesn’t get any of the best lines.  And I feel oddly better about the whole matter having figured that out.

Slight sidebar done…I’m recommending the audiobook here because not only is Cary a wonderful reader (and that voice is to swoon for!) there are also extensive interviews with cast and crew sprinkled throughout.  Clearly someone sat down to interview all these people with a recorder going, and the interview audio is on the audiobook.  So it’s not just a transcript of Billy Crystal, it’s actually Billy Crystal.  So much fun!

But the whole book and the whole movie are so much fun, and apparently the making of was too.  One big appeal of this book is that it’s just what you want it to be.  When you watch The Princess Bride, you (I) want to believe that everyone involved loved making it, loved the movie, loved each other, and love the place the movie has brought them in the culture.  In a way, the memoir is also a love story–to a movie, to the people who made it, and to the people who love watching it.  The story behind the story is, well, exactly as you wish.

Other reviews:
Neon Gods
A Reader of Fictions
Bookish Devices
Anyone else?

Buy it here: As You Wish

3 thoughts on “Book Review: As You Wish by Cary Elwes”