Stories are a big part of the rhythm of my life.  Stressful days call for The Dick Van Dyke Show, depressing ones need Terry Pratchett books and every holiday of any significance has a number of books and movies I pair with it.  So when the world rocked and grew unsettled in recent weeks, it’s not surprising I turned to movies.  Today, two that I’ve found helpful. 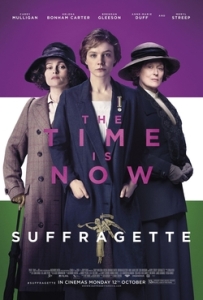 Released in 2015, this looks at the militant suffragette movement in England in the early 1900s, through the eyes of Maud Watts (Carey Mulligan).  A factory worker, she’s gradually drawn into the movement for women’s rights, growing more and more fervent and giving up more and more in the process.  Helena Bonham Carter has a powerful role as Maud’s mentor, and Meryl Streep makes a brief cameo as legendary Mrs. Pankhurst.

This is a hard movie, and you have to be in the right mental space for it.  It is gripping and grim, showing the horrors these women lived with, and the hell they went through trying to secure their rights.  We see how hard Maud’s life is and how little anyone seems to care, and watch as she’s drawn into a circle of women fighting to be heard.  Their methods are at times questionable, but their motivations are extremely compelling.

I’ve loved Carey Mulligan ever since she was Sally Sparrow in the Doctor Who episode “Blink,” and have really enjoyed watching her career grow.  Helena Bonham Carter is powerful here in a role that is, for her, almost restrained.  And Meryl Streep is simply an institution unto herself, perfect casting for the leader of the movement.

This movie did for me exactly what I wanted it to do.  It reminded me of how far we’ve come in the last century, and how far we still have to go.  It inspired me with the stories of how hard women of the past fought and all they gave up.  It made me want to carry the torch forward, though I’ll admit I’m still exploring what that means.  But I’m thinking of it at least, and every time I’ve worn white since, I’ve thought, “White–like the suffragettes.”

All the President’s Men

I might be the first to put these two movies together, but while they are divergent in time and focus, they both feel highly relevant right now.  Another historical piece, it follows Washington Post reporters Bob Woodward (Robert Redford) and Carl Bernstein (Dustin Hoffman) as they investigate and eventually break the Watergate story–and bring down a presidency.

In all honesty, I didn’t follow all of this.  Watergate was well before my time, and this delves into details of individuals involved and legal lines crossed that grow obscure and convoluted.  But I didn’t really care.  I can’t follow all of the conspiracy, but I can follow Woodward and Bernstein as they chase down the next clue, the next detail, the next interview or “non-denial denial.”  There’s corruption in the government and they’re tracking it through higher and higher levels, and that’s what counted for me, not every detail of what that corruption looked like.

The scene that has resonated with me for weeks after watching this movie was the last one.  It’s the Washington Post office.  The television is on, showing Nixon being sworn into office amidst tumultuous applause.  But at the Washington Post, Woodward and Bernstein have their heads down at their desks, typewriters clattering away.  They’re coming, Mr. President.  They’re coming. 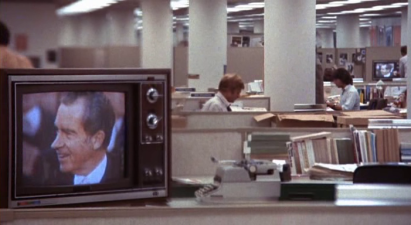 Just as an aside, The New York Times homepage recently added a link with information about how to submit a confidential news tip.  I’ve read them for years so I know that’s new.  You can also find a “SecureDrop” link on the Washington Post‘s homepage.

Women’s rights and freedom of the press are both values near to my heart, and which I believe are integral to a free and just society.  If you need a story from history to inspire you, I found both these movies effective.

One thought on “Movie Review: Suffragette and All the President’s Men”