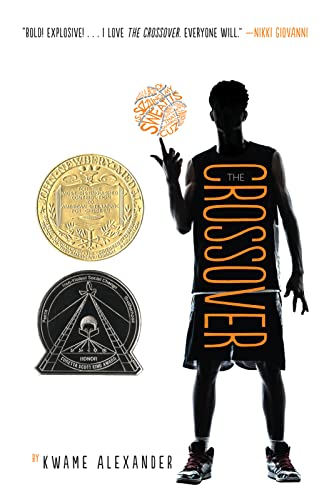 I finished out last year’s Newbery reading by reading the (almost) most recent book on the list.  The 2015 winner, Crossover by Kwame Alexander, sat at the top of the list all year, until I finally added 2016’s winner in December.  A basketball story, I had some doubts about this one—and if I’d realized the format, I would have had more!  But it was surprisingly enjoyable.

Josh and Jordan Bell are twin brothers and high school basketball stars, cheered on by their father Chuck, retired professional basketball player.  Josh is our narrator, telling the story through poetry.   He uses poems to express his doubts and fears as his father begins having health problems, and his confusion and jealousy when he and his brother both develop crushes on the same girl—who seems to prefer his twin.

So the whole book is poems.  Mostly blank verse and other experimental types, which is not even the kind of poetry I like, when I (rarely) read poetry.  And yet, it actually worked.  Alexander did a compelling job telling a narrative and exploring characters through this highly unusual format.  I’m sure there are those who really loved the format and I might not go that far—but it was interesting and didn’t present the barrier I expected at all.

This also wasn’t really a basketball story.  Plenty of basketball, yes, but really it was about Josh, his brother and their father.  And that was a very relatable coming of age story, as Josh deals with his inseparable twin trying to separate, and his invincible father betraying vulnerabilities.

This one was also good for my diversity challenge last year, as Josh’s family is African-American.  One thing I noticed was how little that impacted anything.  In fact, there isn’t even much sign of it.  In part because of the style, the characters are not described physically to any degree.  The only indication of race is that Josh has dreadlocks—and the author himself is also African-American.  So this would be a book for normalizing non-Caucasian protagonists, rather than one directly exploring race questions—and a good example of how we’re really not all that different.

So, an unusual book that didn’t seem to be (and wasn’t really) my style, but a good engaging read anyway!

Other reviews:
Katie Reviews Books
The OWL
The Book Smugglers
Anyone else?

Buy it here: The Crossover