One of my major reading goals this year is to read more spiritual books.  I’m practicing Catholic but I have a broad view on spirituality, so I began my reading with two writers I’ve long been intrigued by, both outside of Christianity.  (Author three was a Franciscan friar so back in the fold, but that’s for another day!)  I started with Rumi, who comes from Islamic tradition, and followed with Thich Nhat Hanh, a Buddhist monk, both of whom I’d been hearing about for a long time. 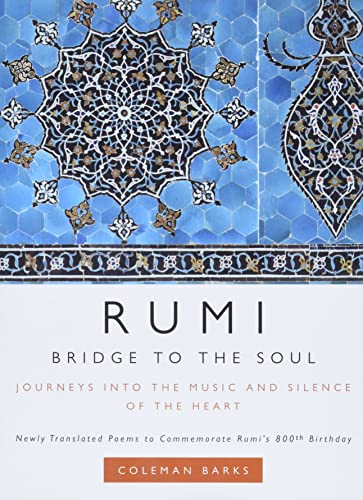 I’ve frequently seen Rumi quoted, and almost always liked whatever I heard.  Despite that, I knew next to nothing about him!  So I hunted my library collection and picked an appealing title – Rumi: Bridge to the Soul: Journeys into the music and silence of the heart, translations by Coleman Barks.

I still don’t feel I know much about Rumi, as the book didn’t turn out to contain much context about the author (though there was a lot in the introduction about an ancient bridge, and the translator’s experiences…for me, it was maybe too much of the wrong kind of information).  But there were some eighty poems by Rumi, which was enough to give me a flavor of him.

I don’t understand Rumi.  But I liked him anyway.  And that’s an unusual stance for me to take!  As probably happens often in poetry, I could read along for several pages with nothing speaking to me, then suddenly a line or stanza would jump out as beautiful or insightful or just intriguing.  I’m not sure what, if anything, I learned exactly…but I do want to explore more.

I don’t have a lot to say about Rumi, but in a strange way I think he’d approve that.  So let me just quote a few lines I liked and leave it at that.

We tremble like leaves about to let go.
There is no avoiding pain,
or feeling exiled, or the taste of dust.

But also we have a green-winged longing
for the sweetness of the friend.

And later in the same poem…

Mice quivering in fear of the housecat
suddenly change to half-grown lion cubs,
afraid of nothing.

So let us begin the journey home,
with love and compassion for guides,
and grace protecting. 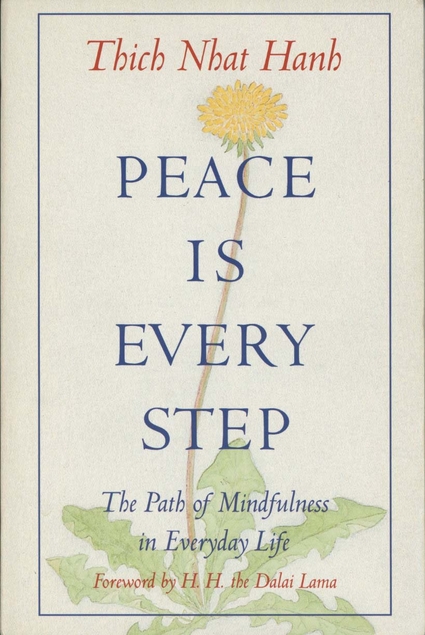 My second author was Thich Nhat Hanh, through his book Peace Is Every Step.  This one had a helpful bio of the author in the introduction.  Thich Nhat Hanh is a Buddhist monk originally from Vietnam, instrumental in peace movements for decades.  It’s an impressive resume to have influenced Martin Luther King, and to have a foreword to the book written by the Dalai Lama!

The book focuses around mindfulness, focusing on the present moment, and finding peace in what can seem a hectic world.  If I had to sum what I learned from the book into one word, it was “breathe.”  He frequently mentions returning to himself through breath.  Through short sections he offers practical meditations, philosophy and insights into seeking greater inner peace–while making it clear that’s not the same as passivity.

I’ve often said that I like books by driven, Type-A women (Gretchen Rubin, Brene Brown, Susan Cain, Sheryl Sandburg…) because they’re coming from where I am.  So I was pleasantly surprised by how relatable Thich Nhat Hanh seemed.  He didn’t seem to exist on the esoteric, removed plain that I half-expected.  He talks about washing dishes and breathing through irritation–and the mere fact that he acknowledges irritation somehow made him more human, and all the more inspiring for that.

My mom has been reading Thich Nhat Hanh for years, and we’ve had the habit of referring to him (affectionately, respectfully!) as “the little monk.”  Since reading his book, I find myself frequently thinking in stressful moments, “the little monk would tell me to just breathe…”  So I try to!  It’s helpful.  I may have to put his picture up at my office.

I’m finding both these books hard to describe, but they both get at ideas of peacefulness and inner work that I found meaningful–and not in any way at odds with my organized religion affiliations!  There are many sources of wisdom in this world, and I’m glad to have explored both of these.

Buy them here: Rumi: Bridge to the Soul and Peace Is Every Step

One thought on “Book Review(s): Rumi and Thich Nhat Hanh”