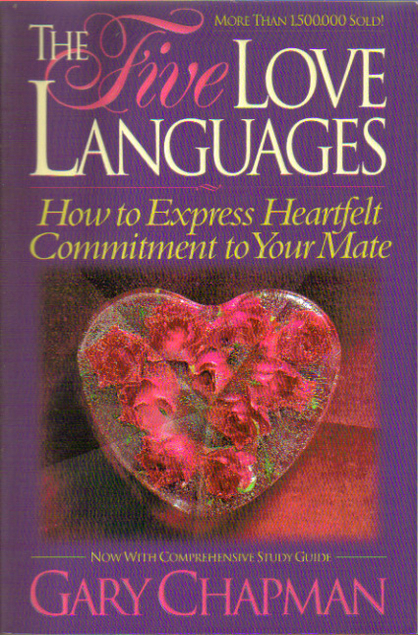 Carrying on my reading of psychological and spiritual reading (because they feel related in my mind), I picked up The 5 Love Languages by Gary Chapman.  It’s not quite either spiritual or psychological (maybe the latter sort of) but it seems to fit into the same general area.  I read one of the sub-versions of this book (there are several) years ago, and I like the concept immensely.  In fact, I liked the book immensely–for 11 of 12 chapters.  Let’s explore, shall we?

Almost everyone I’ve talked to had some familiarity with this book or at least its concept, so maybe you do too–but essentially, Chapman unpacks the ways we give and receive love, or perhaps we perceive it.  There are five essential categories, or languages, used to express love: affirming words, quality time, gift giving, acts of service, and positive touch.  People generally resonate most with one of these, their “native language,” and feel most loved when love is expressed in that language.

At the risk of overusing the word, I love this concept.  Of course I love the idea of taking something as amorphous as expressing love and making it actionable, practical and specific.  That’s kind of how my brain works.  It’s like the difference between “do good” and “volunteer at a food closet.”  “Do good” is a philosophy, while the latter is something you can go out to do tomorrow.  Similarly, being conscious of and acting upon the love languages is an immediate and specific action within a relationship.

I also feel like, even though I’m not an expert on this subject and can’t point to a study, this feels like something that would work, that feels right and applicable.  (Jonathan Haidt would say it appeals to my elephant.)

The book is geared entirely towards married heterosexual couples, with husband and wife terms used throughout and every case study fitting that mold.  Even though I’m not married, it felt applicable with a little imagination beyond that single relationship type (and as noted, Chapman has written other variations).

I also liked the essential concept about choosing to love, that it’s a daily choice and commitment to continue putting love into a relationship, especially long-term.  That feels like a powerful message, that it doesn’t just happen–effort is necessary, but also that’s encouraging because it’s possible.  (It occurs to me that this doesn’t say altogether good things about relationships that end, but I did feel like Chapman’s tone was more compassionate than judging.)

So far so good for 11 chapters.   [rant begins] During those first 11 chapters, I did occasionally pick up on a sense that Chapman has a pretty traditional view on gender roles and possibly gender relations.  Not loving that, but it was subtle enough that I was going to give him a pass.  Then we enter Chapter 12, “Loving the Unlovely,” and an extended case study about a woman trying to salvage marriage with her emotionally withdrawn, unwilling to engage, possibly emotionally or verbally abusive husband.  Chapman counsels her to work on expressing love to him, in the hopes that he will respond over a period of six months.

So.  With the proviso that yes, of course I think there are times when one partner in a relationship can take the initiative and inspire positive change…the whole thing got my shoulders up around my ears.  It might have helped if the case study had not been a woman doing all the emotional work to help her husband who, emotionally if not physically, seems to be actively hurting her.  My shoulders were up before we even got to the husband’s love language–are we all that shocked that it turned out to be touch, especially sex?  Chapman encourages the woman to have more sex with her husband, even though she pushes back by saying she feels used when they do.  Chapman also has a really disturbing tone about how he wants her to do this whole thing as an “experiment” to prove his “hypothesis” and he’ll be really interested in the results.  Oh yeah, and he thinks she should do this because Jesus would want her to, quoting repeatedly from “Love thy enemies, do good to those that hate you.”

Chapman may not have been altogether wrong about this particular relationship–but what really upset me was that he utterly failed to include any kind of warning label with this chapter.  I am not an expert on relationships or on abuse, but I have read other people who are, and here’s what I think should have been there: you cannot love someone enough to stop them from abusing you.  It just doesn’t work that way.  The case study ended happily, so the situation may not have been as dark as I’m imagining it.  But I am sincerely disturbed by the thought of how many women (because mostly it’s women who are abuse victims, though of course it applies across genders) have tried to apply this in their own lives with tragic results.

In truly dark and disturbing relationships, the advice to “love your partner better” sounds an awful lot like the abuser’s complaint that he (usually he) wouldn’t mistreat his spouse if she (usually she) would just say or do the “right” things and stop giving him reasons to hit her, or mock her, or emotionally withdraw in deliberately hurtful ways (pick your abuse, they are all real and scarring).  That hope is often what keeps people in deeply unhealthy and dangerous relationships.

I believe love can be transformative.  I believe Jesus wants us to love our enemies—but I believe that He also understands that sometimes we have to love them from far away, where it is SAFE and quiet and no one is belittling you, mocking you or making you feel used.

Chapman actually did have warning labels in other places, notably under Acts of Service on the difference between loving and being a doormat.  But any kind of warning or proviso was markedly absent where I think it most needed to be. [/end rant]

So!  Where does that leave me with this review?  Conflicted!  I still think 11 chapters and the essential concept is brilliant.  I’ll probably buy a copy of this book (rare for me), I’ll probably adopt quite a lot of its philosophy, and I’ll probably recommend it widely to people I know–but I’m going to recommend it with a warning label!

Other reviews:
Project Life Mastery (a nice overview of the concepts, in more detail than I did)
My Pixie Blog
The Dating Divas
Anyone else?

Buy it here: The 5 Love Languages