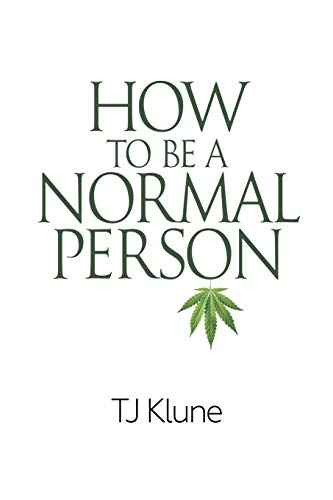 I picked up How to Be a Normal Person by T. J. Klune on a friend’s recommendation–and it turned out to be one of the most fun books I’ve read this year, with a serious contender for favorite romantic couple.  This is particularly remarkable considering it’s way, way far out of the usual genres I read.  For one thing it’s contemporary real world.  Also, it’s a homosexual romance involving an asexual stoner hipster.  And it was brilliant.

The story centers around Gus, who has just been marking time in the past few years since his father died.  He lives in a tiny town of 300 people, and runs his late father’s video rental store (reminder: contemporary novel).  Tuesdays are the worst days of the week–it’s 99 cent rental day and the place is packed, with at least four customers coming in.  And then Gus meets Casey, a new arrival in town, who Instagrams everything, spends most of his time stoned, and writes teen paranormal fiction.  Also, he thinks Gus is amazing, which confuses Gus not a little.  But he thinks Casey is amazing too, and decides he has to learn how to be normal for Casey.

Books are usually about the characters for me, and this one is really about the characters.  And the writing style.  Both are hilariously, hysterically funny.  Gus has an inner monologue going of freaked out confusion for much of the book, and it’s awesome.  He is wonderfully secure and insecure at the same time.  He is totally, fully himself–but loses it completely in unfamiliar or nerve-wracking situations (like, say, Casey saying hi when they meet).  He somehow manages to consciously set out to change himself, without changing even a little.

A few more Gus items.  He decides to learn how to be normal by searching the internet, which is slightly problematic since he doesn’t have it.  There follows the transcript of a wonderful call with the local internet provider, in which Gus explains that he needs to buy the internet so that he can learn to be normal and be in a relationship with an asexual stoner hipster (the phrase comes up a lot).  Gus also has a pet ferret named Harry S. Truman (otherwise known as the ferret with merit).  And he wears pajama bottoms with the face of a past Palestinian leader.  They’re his Yasser Arapants.  Seriously.

Gus does have a few friends, notably the We Three Queens.  They’re sort of a biker gang (with matching jackets), but they’re in their seventies and ride Vespas.  They are no less intimidating for that.  They have somehow adopted Gus, and come into his video rental store every day to rent that day’s movie.  They’re watching the entire collection in alphabetical order.  Gus is not quite sure if they’re sisters, or in a polygamous lesbian relationship, and does not dare ask.

As noted, Casey smokes marijuana a lot.  So, fair warning–lots of that in here, but no heavier drugs.  There are a few explicit references (Gus gets a little lost occasionally on the internet…) and some profanity, so warning on that too, depending on what readers may be comfortable with.

Despite the adult content, it’s a really sweet romance.  And you are always going to win me over when a character knows he’s freaking out over what could be a misunderstanding, thinks about running away, and instead goes to have a mature conversation to clear the air with his love interest–and calls it that out loud.  I like self-awareness.

I started out with this book because of the asexual aspect (I was bemoaning the portrayal in Clariel and my friend suggested this one).  Just to be clear, I’m not ace so I can’t speak from personal experience about the accuracy here, but based on what I’ve read (and my friend’s recommendation), it seems like a much healthier, more educated portrayal.  It also makes clear the crucial distinction between asexual and aromantic (so Casey is interested in romance, but not in sex).

Okay, last point to help you decide if this is a book for you or not.  Near the end there’s a very, very bad joke that I have now been telling to everyone.  What is it called when Batman skips church?

I know, it’s terrible!  And probably even worse if you had to click the link to understand it. 😀 And it’s a great book!

Other reviews:
A Novel Approach
Three Books Over the Rainbow
The Notes Which Do Not Fit
Anyone else?

Buy it here: How To Be a Normal Person