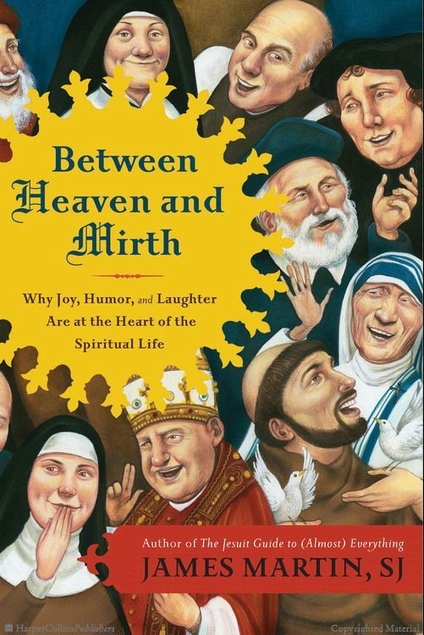 I don’t think people in general fully appreciate the humor in the Bible.  I was lamenting this while on a retreat a few months ago, and a woman at my table recommended Between Heaven and Mirth by James Martin, SJ.  On my list it went, and in due time it landed in my spiritual reading slot.  It was excellent!

It turned out to be not quite so much about humor in the Bible (though there was some of that), but rather about how humor and especially joy are at the heart of Christianity.  Or as the subheading says, “Why Joy, Humor and Laughter Are at the Heart of the Spiritual Life.”  There’s also extensive historical discussion about why this is frequently not the viewpoint—or, in other words, why religion can be so grim sometimes.

I enjoyed this one a lot.  I love the emphasis on bringing humor and joy into spirituality—or, rather, why it doesn’t need to be brought in because it should be there all along.  Martin gives examples in history of joyful saints and religious figures, and brings out the more joyful aspects of the Bible, some of them not always apparent.  He argues that many of Jesus’ parables would have been seen as funny in their day; we may intellectually know that he’s exaggerating what a normal wheat crop would be, but an agrarian culture might have been much more struck in a humorous way (as they say, jokes aren’t funny when they have to be explained).

Speaking of jokes, Martin also tells a lot of jokes with religious elements.  They’re never mean-spirited or disrespectful, and many are quite funny.  As a Jesuit priest, he told a lot of jokes about the Jesuits—I suppose figuring that he could get away with that!

I also appreciated the historical exploration on how grimmer aspects came into religion.  It was validating for me on a couple of levels—first, affirming that this really is a thing, in the past and today, and second, pointing out that it doesn’t have to be, that this is a strain that entered the Church later on through human people.  And there are opposing views too, and always have been!

I loved the cover so much too, with all the smiling saints.  Martin points out that if you look around churches, you never see the saints smiling.  I never thought about it before—but it’s true!  I looked around my church (which is not by any means a gloomy or grim place), and nary a smile.  Reflective, but not smiling.  No wonder we get an impression of grimness in religion!

Martin also cites a lot of other books with a similar focus…so many more got added to my list.  I look forward to reading through more books about God, humor and joy.  Sometimes the best place to find new nonfiction books is inside others!

Brandon Vogt
The House of the Seven Tails
Samaritan’s Song
Anyone else?

Buy it here: Between Heaven and Mirth

One thought on “Book Review: Between Heaven and Mirth”