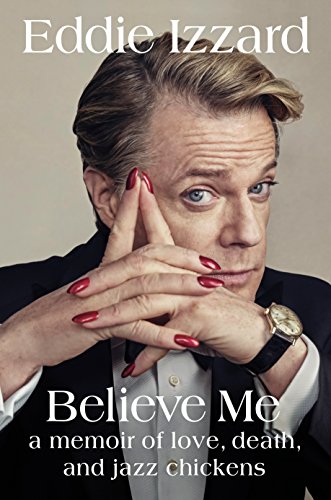 I have had quite good luck listening to comedians read their autobiographies (because, after all, they know how to be funny!) and Eddie Izzard’s Believe Me audiobook was particularly good.  Izzard is a British comedian who does stand-up tours and is also rather famously a transvestite (or transgender…more on that later).

As autobiographies do, Izzard’s goes through his life from childhood (actually, he discusses his parents’ lives before he was born too), how he got into acting, how he began expressing himself as a transvestite and how his career progressed on up to the present.  And because he’s a comedian, it’s funny–probably much more so in the audiobook even than the printed version, because he digresses.  At length.  Frequently.  And it’s delightful.

Izzard’s comedy style is very conversational monologues, often telling stories with frequent asides and remarks.  (See my favorite, the Death Star Canteen.  Mature language warning.)  He often gives the impression of ad libbing at length.  I have no idea if it’s true on stage, but it definitely is in the audiobook, as he’ll frequently seize on something, discuss at length, remark, “that wasn’t in the book.  Okay, back to the book!”  The book also has footnotes, and he uses these as opportunities to expound and digress, often closing them with “end of endless footnote.”

You can’t expect the book to be too linear.  It’s not even structured very linearly (roughly chronological, at least as far as childhood, young adult, early career, later career), with a lot of circling around within rough time periods.  But as long as you’re willing to ride along with him, it’s very funny throughout.

A not funny part, Izzard’s mother died when he was very young, about seven.  For the first third at least of the book, this dominates.  It feels a lot like a black hole–his mother’s death is the gravity center that this part of the book is circling, and every time he starts to move away from it the narrative circles back again.  Oddly enough, it didn’t bog the narrative down, and in some ways the first part was the best.  He may also have rambled and ad-libbed (and even researched in real time) the most in the beginning.

Two issues I did have.  One is that he rather belabors the point (he remarks on it himself) that he doesn’t believe there is a God.  Which is fine, he believes what he believes…but he managed to remark on it a lot.  The funny thing is, I feel like it kept coming up because he talks about the universe as though there is a God providing some sort of order, then feels he has to correct that.  As in, “one person can’t win everything, that wouldn’t be fair, God wouldn’t allow that–but of course, there is no God.”  I am religious so this may not have sat well with me for that reason, but I also think I felt rather the way I’d feel if a religious person belabored their belief.  Just, enough, all right?

Two, Izzard confused me horribly regarding the transvestite/transgender question.  He uses the terms interchangeably, and I don’t think they mean the same thing!  Just to be clear, I’m not judging him on whatever identity he is–but I literally could not tell what he meant, or if he’s in some place between the two concepts.  He also kept talking about expressing his transgender identity as expressing his sexuality, which…gender and sexuality are two totally different things.  I’m not in the LGBTQ+ community (and he is in some fashion) so I actually feel a little uncomfortable making comment on this, but I’m not sure if others within that community would have problems with how he discusses these issues.

So, two very different things I sort of feel obliged to give trigger warnings on!  But, they’re actually a pretty small aspect of the book.  And along with being very funny, he has some very positive philosophy about making connections across divides, doing good for one another, and trying to build a better world.  And the book’s just very funny.  As I said, his comedy is conversational, and his autobiography is a lot like having a twelve-hour, slightly one-sided conversation with a very funny guy.

One thought on “Book Review: Believe Me by Eddie Izzard”