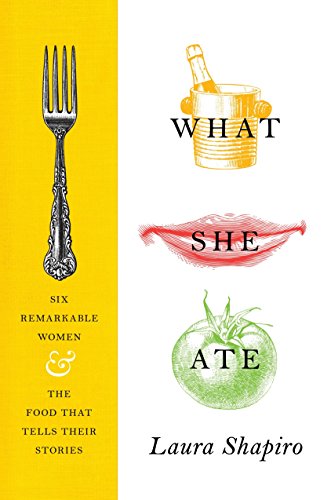 I have a friendly coworker who reads a lot of nonfiction—not usually my style of books, but she recently had one that sounded fascinating.  Happily, the audiobook wait list at the library was short (apparently the physical book list was long…) and I got to enjoy listening to What She Ate by Laura Shapiro, six essays on six women in history, their stories told through the food they ate.

Of the six women, the only two I recognized were Eva Braun (Hitler’s mistress) and Eleanor Roosevelt (no introduction needed, surely!)  The other four are Dorothy Wordsworth (the famous poet’s sister), Rosa Lewis (Edwardian-era caterer), Barbara Pym (novelist) and Helen Gurley Brown (Cosmopolitan editor).  Their lives vary wildly, in circumstance, era and character, the essays tied together by the focus on food and each women’s relationship to it.

I like history and I like psychology, and this combined a bit of both, while putting the focus squarely on one of my other favorite narrative elements: an engaging heroine.  While three (two and a half?) of these women are best known for the primary man in their life (Eleanor is the half), these essays are still squarely on the women in a way I found very satisfying.  Obviously Hitler, William Wordsworth and Franklin Roosevelt figure largely, but it’s still about the women and what they’re doing, thinking and eating.  I started reading Ladies of Liberty and found it was so focused on the men (!) that I stopped.  That wasn’t a problem here.  And three out of six were clearly independent women getting things done (though Helen Gurley Brown might deny it).

I think in life I’d most like to hang out with Barbara Pym or Dorothy Wordsworth.  Eleanor would intimidate me (leaving me to wonder why she’s the one I refer to by first name, but it feels natural so I’ll leave it!) and Rosa Lewis, in a very different way, might too.  Helen Gurley Brown and Eva Braun I wouldn’t get on with at all, for wildly varying reasons.  But–I really enjoyed hearing about all of them.  Shapiro paints a fascinating portrait of every woman, while also expanding the focus enough to give us insights into their respective times, cultures and circumstances.

Dorothy is the most domestic of the stories, opening the book with a largely charming essay.  Rosa was a delight, a self-made woman who rose from an impoverished background to run her own catering business serving the king, and kept her Cockney accent and colorful ways all along.  She’s exactly the kind of woman I want to read about when reading women’s history–not the wife of someone famous, but an active, instrumental person in her own right.

Eleanor’s story delved perhaps the most into food culture of the time, and did maybe the most analysis on her relationship to food (and Franklin, and the role of First Lady).  Eva’s is unavoidably grim, of course, but also fascinating.  I knew so little about Eva other than her infamous death.  I know a lot about World War II, and this uncovered a new and intriguing angle.

Barbara Pym was a British author who included food in her stories (something often oddly absent).  Her cozy books about heroines drinking Ovaltine, working in jumble sales and romancing ministers sounded so delightful that I read her Excellent Women.  It was delightful, all the flavor of a small British village story (even though it’s in London!) and the food is very much apparent.  Barbara savors food while Helen is constantly regulating and controlling it, perpetually dieting.  She was a fascinating personality too–though not one I’d want to go to lunch with.

This was in some ways an odd book, with it’s particular focus, but it’s done so well.  It’s about so much more than food–and yet it is, definitely and defiantly, about food!  It won’t knock The Feminine Mystique out of best nonfiction book of the year so far, but it was still awfully good.

Buy it here: What She Ate

One thought on “Book Review: What She Ate”