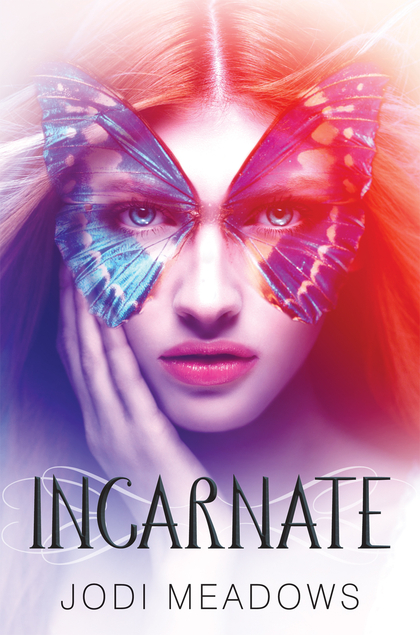 You may have noticed the blog was quieter than usual last week – my marketing job had me in Las Vegas for a conference, which rather overwhelmed everything else for a few days!  I did very little reading while I was traveling–and then spent the weekend after doing little else, recharging my introvert batteries after being surrounded by hundreds of people.  I spent a good bulk of the past few days tearing through Incarnate by Jodi Meadows.  It was a great way to recharge.

Incarnate is a fascinating fantasy novel that hit a lot of my favorite things.  Set in a world with sylphs and dragons (you don’t want to cross either), the most interesting part is still the humans: there are a million of them, and for five thousand years they have all reincarnated again and again, and remember all their lifetimes.  But then Ana is born–a “newsoul,” replacing another soul, and no one knows why.  Eighteen year old Ana is seeking answers for why she exists, and what it means to be human when you’re the only one without 5,000 years of identity behind you, or the promise of countless lives ahead.

I find reincarnation stories fascinating, but I’ve never seen one like this.  Normally the person remembering their succession of lives is the oddity.  I loved seeing a society where that’s the norm, and the culture, the societal structure, even the government, are based around that idea.  There were so many fascinating details – like the journals everyone keeps to help them remember their many lives, or the notion of maintaining a graveyard of all your past bodies (a little creepy, I know, but well-handled in the book), or the possibility of being mothered by someone younger than you, after your mother died in childbirth and came back again.

So much that was interesting, and I have so many questions still – like what the ties of a nuclear family look like when you could have 100 different parents in different lifetimes, or whether the society is completely without sexism because everyone has lived in different genders, or whether people marry (or partner in some other way) for a single lifetime.  A commitment ceremony that extends across lifetimes is heavily featured, but it’s established as rare.  And how do they maintain a population of exactly one million, no more, no less?

There are two more books in the series, and the happy thing about coming to a book late is that they’re already out.  I have the second on reserve at the library now, so perhaps some more questions will be answered!

Clearly the world-building fascinated me here, but I loved the main characters as well.  I found Ana prickly but easy to love.  It’s clear at the beginning of the book that she’s been raised in isolation by her emotionally-abusive (at a minimum) mother, and it’s given Ana deep fears and trust issues.  It also gives her a strong streak of independence.  She learns to open up and trust more throughout the book, while keeping some strong, go-it-alone attitude.

Luckily for Ana, she is swiftly taken under the wing of Sam, who is just about the kindest, most understanding person she could hope to meet.  Sam is sweet and creative and sometimes hides secrets he shouldn’t, just in case it seemed like too much light and sweetness.

I don’t think it’s much of a spoiler to say that there’s a romantic charge between Ana and Sam, and I’m surprised by how much I liked it.  It’s an odd situation–they’re physically the same age, but Sam is mentally 5,000 years old.  And it’s convincing that he’s lived a lot of life and grown and matured and changed along the way.  There’s a definite mentor/protector vibe to his feelings towards Ana, which could very, very easily have made a romance creepy–but it really wasn’t.  And I tend to be alert to that kind of creepiness!  It’s a very slow-burn romance (my favorite kind!) and we see him give her a lot of space and agency, which may help.

The plot, the exploration of why Ana is here and what it means, is also good, and there is exciting conflict and danger here.  Also dragons and sylphs and a very sinister temple.  So I liked all of that too!  It came third to me behind the worldbuilding and the characters, but that’s not because it wasn’t a solid plot.

It’s nice to be sitting on February 10th with a real contender for several of my “best of the year” categories.  And it’s nice to have the sequel “In Transit” at the library too.

One thought on “Book Review: Incarnate”