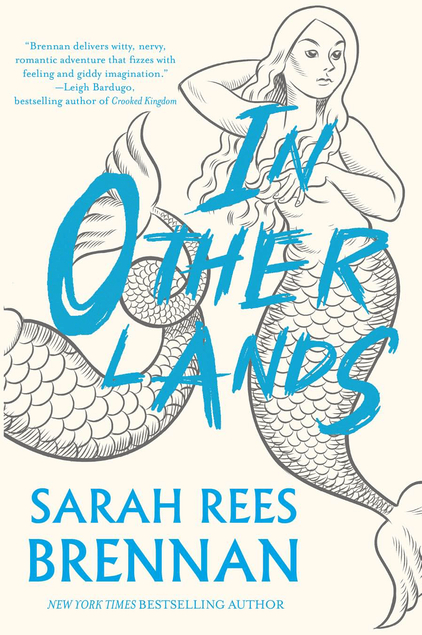 A Book Club friend recommended In Other Lands by Sarah Rees Brennan some time ago, and I finally got to reading it in the last couple weeks.  I’m glad I finally did, because it was funny, insightful and very original, while commenting on so many familiar story tropes.  Excellent read!

The story centers on Elliot, a boy from what we’d recognize as the real world, who has the chance at age thirteen to cross a magical wall into a country wholly separate and secret from the world he knows, where magical creatures abound.  He’s invited to join the Border Camp, launching us into something that somewhat resembles many other stories of children going away to magic school.  Except – Elliot is obnoxious, sarcastic, and cuts right through any pleasant fantasies.  He’s wildly indignant that they have no pens or central heating, and when he realizes they’re being trained for war promptly observes that they’re being turned into child soldiers.  Which is…actually quite true, but something I’ve never seen put so bluntly in any magical book!

Elliot only agrees to stay because he meets Serene, an elf maiden.  Her full name is Serene-Heart-in-the-Chaos-of-Battle.  Elliot thinks this is the most badass thing he’s ever heard, falls promptly in love, and agrees to remain.  Also, maybe he’ll get to meet mermaids.

This was a delightful story on so many levels.  I enjoy Elliot enormously.  He hits several of my favorite things in characters: someone with a contextual awareness of existing tropes when they meet magic; an unusual child unappreciated by the adults in their lives (who finds their place eventually, of course); someone with well-deployed snark; and someone who cuts through the above-mentioned tropes with logic and practicality.  It also quickly becomes clear that Elliot is more complex than simply a smart-aleck kid.  He’s been a victim of bullying who has now put up a very thick wall of indifference, scorn and insults.  As the book goes on, he gradually opens up, makes connections and understands more about other people–while remaining a sarcastic smart-aleck.

Serene is a fierce elf warrior – because in this magical world, elven society is arranged on opposite gender lines to humans.  They’re in fact deeply sexist, but they believe that women are strong warriors, while men are delicate, emotional flowers.  The cultural mismatches and Serene’s casual comments about what men or women are like are frequently funny and sometimes surprisingly insightful.  It’s easier to see the absurdity when it’s a flipped lens.  For instance: it doesn’t feel weird to refer to a woman as a “sword-brother,” but it feels far stranger to refer to a man as a “sword-sister.”  I’ll hold back on the feminist rant about which gender is considered more desirable to emulate, and just say that there were a number of “huh, interesting” moments in here.

Elliot and Serene form a trio with Luke Sunborn, who has every indication of being the golden-haired warrior Chosen One of the story.  Elliot tries very hard to hate him, but never quite manages it.  Their relationship is fractious and full of misunderstanding in a beautiful, human way that ultimately ends up satisfying.  I also love that Luke is eventually revealed to have deep insecurities, and probably Imposter Syndrome.  This is completely unfathomable to Elliot, who perceived Luke as the soul of confidence and popularity, and I like that reminder that we don’t really know what struggles anyone is dealing with.

This is a more mature book than many of the magical books it’s riffing from.  As the characters become teenagers they begin having sex, but it’s handled tastefully.  It doesn’t have the feel of some (Wicked, The Magicians) that seem to throw really uncomfortable sex in just for the shock value.  The real dangers of violent warfare are also addressed, particularly as Elliot goes into agonies of fear for his friends going into battle and can’t understand why everyone else sees it as a heroic lark.  The violence is implied more than it’s shown, and isn’t graphic or gratuitous.

I also appreciated the diversity here.  Not so much racially (although a lot of interspecies conflict in the magic land seemed to reflect racism in the human world), but as the story goes on we learn that Elliot is bisexual and Luke is gay, and each of them figuring out those identities is a big part of the story.

I enjoy a good magical school story, and I really like how this book upended some of those concepts, delved into complex character and relationship issues, and also created a really interesting magical world.  And Elliot really was wonderful.  Highly recommended!

One thought on “Book Review: In Other Lands”