This week’s Book Blogger Hop question: Do you collect things that are book related? Like bookmarks, nameplates, 1st editions…

I mostly just collect books!  I wouldn’t say I have any collections of bookish things, but I do have a handful of souvenirs that I bought because of their bookish connections…

I visited the Harry Potter Studio Tour earlier this year, and couldn’t resist buying a wand at what must be the coolest gift store ever (boxes of wands, piled everywhere!)  You can get pretty much any character you could possibly want, but I decided on Hermione’s, because it’s gorgeous but more importantly because–seriously, Hermione?  SO awesome. END_OF_DOCUMENT_TOKEN_TO_BE_REPLACED

This week’s Book Blogger Hop question: Do you use bookmarks? If so, do you match them to the book you’re reading or do you use random scraps of paper?

I have a bookmark collection, and have been mostly using the same ones for ten years or so.  They’re all home-made, and I remade some just a  few months ago because they were getting rather tattered around the corners.

My bookmark collection, essentially, reflects some of my very favorite characters…

Mostly, it’s the characters I wrote stories about in my fanfiction days–and so they continue to live in my head (and the books I read) in a way that other much beloved characters do not.  The exception to that rule is the Doctor Who bookmark, which I created new when I was refurbishing the others.  That’s also my only two-sided bookmark… 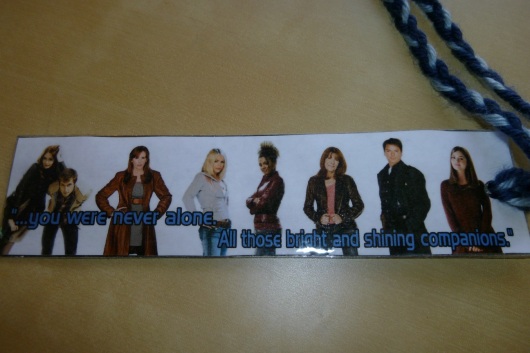 When I’m thinking about it, I like to match characters to the book I’m reading (a couple of recent reads involving Rome were definite Kirk books, for instance, while Peter Pan usually lands in the kids books).  But I don’t always think about it, and end up using the same one for weeks!

Do you have favorite bookmarks you like to use?  Any particular habits around them?

This week I thought I’d re-post one of my earliest “Favorites Friday” posts (creating a “Classic” about Classics), because…it bears repeating, and I feel like I have more-recently-joined readers who might have good suggestions for what else could be on this list!

I think there was something in the water in Great Britain near the beginning of the last century.  Fairy dust, perhaps, because that’s when so many of the great classic children’s fantasy books were written.  There’s something about them–a style, a flavor, a spark–that marks them out as part of a very special group.

I doubt many titles or authors on this list are new to you (they are, after all, classics!) but still, here’s my list of favorite writers of British children’s fantasy classics, noting their most famous books.  Some books are earlier and some are later, but all have that particular flavor.

In no particular order:

And #10, Honorary Mention, is L. Frank Baum, who wrote the Oz series (and many others that are just as good).  He was American, not British, but somehow contrived to write books with that same magical flavor.

There must be classics I’m missing–what are some of your favorites?  And are they sprinkled with the same fairy dust?  🙂 I hope so–I’d love to find more!

Last week I wrote about living authors I’d love to meet–and since they’re living, it’s at least somewhat possible.  Many of my favorite authors, however, lived several generations ago, putting meeting them out of the question.  Unless, of course, I had the ability to travel in time–using a TARDIS, perhaps!  If the Doctor ever showed up and asked me what time I wanted to visit, I’d know exactly what to tell him…

L. M. Montgomery would be the first person to meet, probably to no one’s surprise!  I’ve read every scrap of writing by her I can get my hands on, letters and private journals included, so more than any other author she already feels like a friend.  I know exactly when and where I would like to go–June of 1908, when Montgomery was still living in Cavendish, on Prince Edward Island.  According to her journal, her copy of Anne of Green Gables arrived on June 20th.  Besides that excitement, it seems to have been a cheerful period (not always the case).  Her journal also mentions that it was the most beautiful June she could recall–and I’m sure she said somewhere else that nothing is more beautiful than Prince Edward Island in June.  If I had a TARDIS, my first stop would be to go pick strawberries and ramble through woods with Maud Montgomery.

William Shakespeare would be my next trip (following the Doctor’s footsteps, in this case) because, I mean, Shakespeare!  I have to wonder if he sounded out loud like his plays, or not (probably not…)  And then there’s that authorship question to explore.  I’d visit Shakespeare in autumn of 1599, when my favorite comedy, Much Ado About Nothing, was debuting at the recently-opened Globe Theatre.

Brenda Ueland is a far less famous choice.  She wrote my favorite book on writing, If You Want to Write.  She also taught writing classes, and if they were anything like the book, they must have been wonderful.  If I could, I’d visit long enough to take some of her classes–perhaps in 1938, the year her book was published.

Diana Wynne Jones wrote so many amazing fantasy books, and by all accounts (and the evidence in her own semi-memoir, Reflections on the Magic of Writing) she was a fascinating woman full of extraordinarily colorful anecdotes.  I don’t know precisely when I’d like to meet her…unless possibly when she was at university, so that I could join her attending lectures by C. S. Lewis and J. R. R. Tolkien.

J. M. Barrie is probably no surprise either.  Like Montgomery, I feel as though I know him, because all of his books (and plays, somehow) feature a most charming narrator.  I can’t help feeling like that narrator is Barrie himself.  I’d like to meet Barrie and the Davies boys (the inspiration for Peter Pan) in April of 1904–in Kensington Gardens, of course.  George, the oldest boy, was twelve, and Barrie had just finished writing the play version of Peter.  The other advantage to April is that the daffodils would be blooming in the Gardens, and I love daffodils.

So if the Doctor came to your door and invited you for a literary spin in the TARDIS, what authors would you go to meet?

“Come away, O human child: To the waters and the wild with a fairy…” – William Butler Yeats

Spring has begun this month, and with it, the Once Upon a Time Challenge on Stainless Steel Droppings (my launch post here)…and so I have fairyland on my mind.  I’ve never climbed through a wardrobe, been abducted by the Green Wind, or fallen through a rabbit hole, so I can’t share photos from the various places those routes would take you 🙂 and cameras probably wouldn’t work anyway.  But as regular readers know, I have gone rambling about Kensington Gardens, where Peter Pan flew to when he “ran away from home and lived a long, long time with the fairies.”

Part of the fun of the Gardens is that there are no plaques or ceramic fairies or touristy things to point out the different sites of interest.  You have to take a quest, with J. M. Barrie’s The Little White Bird as your guide, and find the magic spots yourself.

Fortunately, the fairies seem not to object to cameras!

If you look closely, you can see one of the “paths which make themselves”–at night, of course, which is when everything really magical happens in the Gardens. 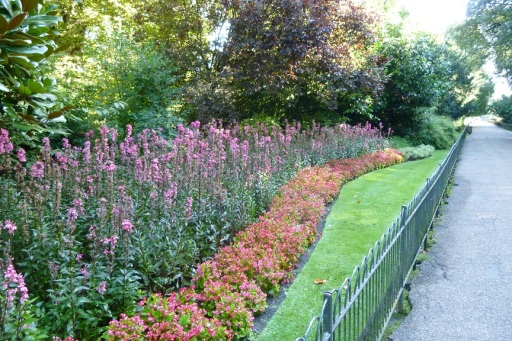 These are flowers along the aptly-named Flower Walk.  Barrie tells us that fairies caught abroad by humans will pretend to be flowers.  His advice on the best way to spot a fairy is to stare at a “flower” until it can’t help winking at you.  (I don’t know what that would look like either!)

This is the branch of the Weeping Beech in the Flower Walk, where Peter Pan spent the night immediately after running away from home.

If you can’t find some fairy dust, and reliable directions on how to fly past the second star to the right, you can at least go see the island in the middle of the Serpentine.  Peter spent some time living there too, until he built a boat and (eventually) learned how to fly.

The Gardens are not the most exotic or showy of fairylands, but they’re certainly the most accessible–and they are every bit as charming as J. M. Barrie.

If you feel like visiting fairylands, even in books, why not join up with the Once Upon a Time Challenge?  And of course, you can also find more Saturday Snapshots on At Home with Books!