I had a fun event in my writing career recently…you may have heard 🙂 that I published a Young Adult fantasy novel.  I have a friend who’s a school librarian, and a few weeks ago she invited me to come to her school for an author event, speaking to the fourth and fifth grade classes.

This was slightly nerve-wracking, but they were a friendly audience!  I spoke a little about writing, read one of my favorite scenes from The Wanderers, and asked for questions.  And fortunately there were a lot of questions!  Many of them were along the lines of “where do you get your ideas,” which I hear is the number one question authors are asked…

I wish I had a photo from the event–but what I do have is a photo of the stack of books the kids ordered.  And that looks pretty cool too! 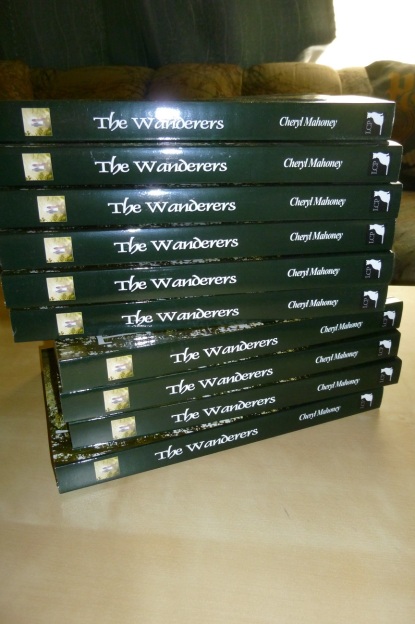 Did any writers ever come to your (or your kids’) schools?  Who would you like to see for an author event?  When I was a kid, I would have been utterly over the moon to have Tamora Pierce come speak (still would be!)

In my last two Saturday Snapshots, I shared photos of celebrity sightings at the Wizard World Convention.  No more celebrities this week, but I have been promising a picture of my completed Doctor Who scarf being worn…and since I wore it all day at Comic Con (and never tripped!–so proud), it was a perfect photo opportunity too.

In my last Saturday Snapshot, I shared some photos of celebrity sightings at the Wizard World Convention.  This week I have photos of one more very exciting guest…

Billy Dee Williams, who you may recognize as Lando Calrissian from Star Wars.  Maybe it’s the influence of the Star Wars books I’ve read (more on that in a moment), but to me, Lando seems just about as exciting as anyone else in the Star Wars universe.

Billy Dee Williams is on this season of Dancing with the Stars, and his dance partner was a surprise guest.

She dressed appropriately for the venue. 🙂

I posted once already about my souvenir from the convention, but I’ll share it again…I suspect that The Lando Calrissian Adventures contributed greatly to my excitement at seeing Billy Dee Williams, so it’s beautifully fitting that I got him to sign my copy–and it’s much more unique than an 8×10 photo!

Last weekend, Wizard World put on a convention in my city–and I and many other geeks turned out to browse merchandise and watch celebrity interviews.  Naturally I brought along my camera…so naturally I thought of sharing some photos with you!

First presentation was by Michael Rosenbaum…who you might recognize more easily if you imagine him without hair.  He’s best-known as Smallville‘s Lex Luthor.  He was brilliant in-person, doing his entire presentation from the center aisle. 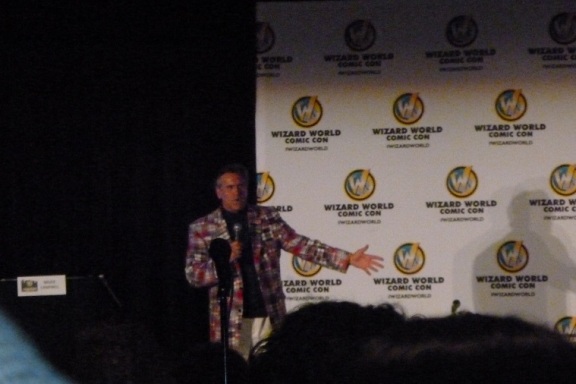 I was much farther away from Bruce Campbell, who I know best as Autolycus from Hercules and Xena, but apparently he’s far better-known for other things…or so I’ve been told.  All I know is that the horror fans at my writing group found Campbell to be the most exciting celebrity guest.

But my most exciting guest was…

…Mr. William Shatner, Captain Kirk himself!  He gave a hilarious, rambling interview (discussing, for instance, the precise meaning of the phrase “larger than life”).  He also allowed me to complete my set of celebrity sightings–with the exception of the late DeForrest Kelly, I’ve now seen every regular cast member from Star Trek: The Original Series.  Achievement unlocked! 😀

More photos next week, this time for the Star Wars fans…

My last big knitting project was to attempt the Doctor’s Scarf–that ridiculously long scarf that Tom Baker wears in old episodes of Doctor Who.  I got a pattern off of wittylittleknitter.com, chose some pastel variations on the Doctor’s colors, and happily knitted away from Thanksgiving to Valentine’s Day.  And the result is…

Oddly enough, I think the lighting made the colors look less pastel, and more like Tom Baker’s!  Believe it or not, I can actually wear this scarf…I just have to loop it several times!  I’ll have to get someone to take a picture of that for a future post. 🙂

I’ve mentioned once or twice (or thereabouts!) that I’m a fan of The Phantom of the Opera.  I may have also mentioned that I’m a member of the Michael Crawford International Fan Association.  Mr. Crawford, of course, was the original Phantom in London and Broadway.  The MCIFA had a special sale recently of memorabilia…and I bought the most splendid of souvenirs!

This is a prop letter from the Phantom to Carlotta, actually used in the Webber production, and signed by Michael Crawford and Leigh Munro, who played Carlotta.  I couldn’t resist a signed letter…or a matching set of Andre’s and Firmin’s notes! 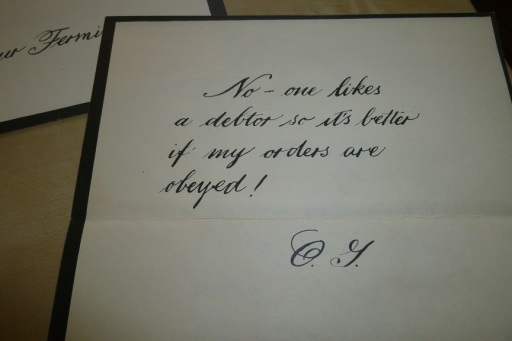 The Phantom’s letters feel far more personal than almost any other souvenir…and they’re particularly meaningful to me, because of one of my favorite moments in the play.  During the song “Prima Donna,” seven characters run about the stage, mostly waving letters and trying to placate Carlotta.  One of those characters is Meg Giry.  While others sing at the front of the stage, often (not in every production, but often) Meg slips to the back of the stage to examine all the Phantom’s letters.

It’s a tiny moment that probably 99% of the audience never notices.  I always watch for it, and it helped inspire my belief that Meg has a very special interest in the Phantom…and have I mentioned that I’m writing a novel from her point of view?

Visit West Metro Mommy for more Saturday Snapshots, and have a wonderful weekend!

A few weeks ago I shared a recent knitting project and alluded to my next one…a very large project involving seven colors of yarn.  As some of you guessed, I am in the midst of knitting the Doctor’s Scarf!

For the non-Doctor Who fans, the 4th Doctor, Tom Baker, is probably best-known as “the one with the really long scarf.”  I started watching some old Who, got psyched up on the 50th Anniversary Special just as I was finishing my last knitting project, and decided to attempt the Doctor’s Scarf.  Here’s the work in progress: 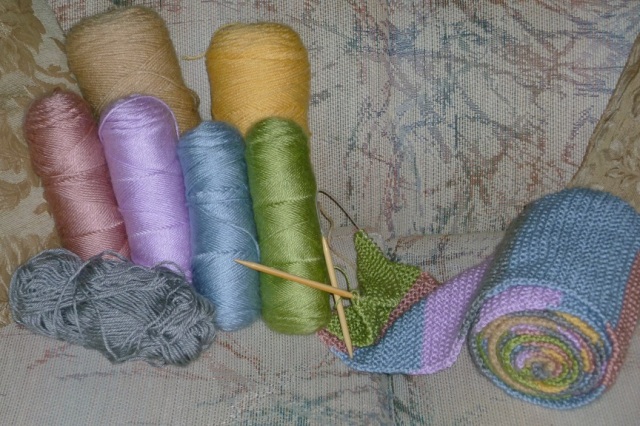 Oh, but that’s probably not quite what you wanted to see, is it?  🙂 Here’s the unrolled work in progress…

The scarf is currently about eleven feet long.  See that red stripe with blue stripes on either side, on the righthand pillow?  That’s roughly the midpoint, so I figure the complete scarf will be around 20 feet.  There will be much looping when it is worn.

You may wonder about the design…there are certain websites where people take the Doctor’s Scarf very seriously.  I’m using a pattern from wittylittleknitter.com, a site I highly recommend if you plan to attempt this yourself.  I’m doing some variations on the pattern–I changed a few stripes due to complicated reasons involving what yarn I have, and mine isn’t as wide as the pattern recommends.  More significantly, while I’m following the color pattern, I chose my own shades of green, red, etc., because I don’t actually like the Doctor’s colors!  So I’m doing a pastel version of the Doctor’s Scarf–or as one friend suggested, it’s a Romana Scarf.

Visit West Metro Mommy for more Saturday Snapshots, and have a great weekend!  I’ll be knitting for at least part of the time… 🙂