Lately I feel like I’m always on a hunt for more light-hearted books.  I’m not sure when that became a hard thing to find?  I’ve had some interesting reads in the last few weeks, but it’s been…mixed in terms of the tone!

As Old as Time by Liz Braswell sounded brilliant, a Disney-sponsored novel with a twist on their Beauty and the Beast movie (they have a whole series, in fact).  The first twist was that Belle’s mother was the enchantress who cursed the Beast, and the second twist was that Belle accidentally destroys the enchanted rose, making the curse much worse.  There were good parts to this, but…!  Too much of it was almost word for word retelling the Disney movie, and then when it diverged we somehow plunged off into an insane asylum where some seriously creepy torture is going on, which sat…very weirdly in a Disney movie-inspired book!  You don’t expect lobotomies in a Disney story!  I also thought the romance got very little attention, so that when Belle’s father eventually remarks that Belle and the Beast are “obviously” in love…it was really, really not obvious. END_OF_DOCUMENT_TOKEN_TO_BE_REPLACED

Today’s Book Blogger Hop question is: If you could take the place of any fictional character, who would it be and why?

This is a rather intriguing question…I assume this would be for a brief visit, and I assume I’m still me but occupying the role of a fictional character, with the other characters not seeing anything strange.  So!  With those parameters in mind…

The first one to come to mind is Dr. Watson.  I don’t think I could be Sherlock Holmes, and besides, I’d want to meet Holmes, so it would be better to have Watson’s role.  As long as medical knowledge wasn’t called for to help solve the case, I think I could be a decent Watson–even though I’m more squeamish than he is!

I definitely couldn’t be Anne of Green Gables, but it would be nice to try being her friend Diana Barry for a bit.  Or it might actually be more fun to be Ilse, friend of Emily of New Moon.  I like Emily a lot, and Ilse can get away with wild statements and flights of passion that, while not really me, might be fun for a change!

END_OF_DOCUMENT_TOKEN_TO_BE_REPLACED

I love Top Ten Tuesday and rarely post for it–but this seemed like a perfect topic for Valentine’s Day!  Top Ten Tuesday is hosted by That Artsy Reader Girl, with a new topic each Tuesday.  This week, it’s romance.

I wandered through my bookshelves, and pulled out a stack with my favorite romances in them–with a few bonus bromances and womances.  In no particular order…

1) The Mischief of the Mistletoe by Lauren Willig
Arabella and Turnip – I’ve written at length about these delightfully unconventional romantic leads, who are overlooked by everyone but each other.

2) Jane Eyre by Charlotte Bronte
Jane and Mr. Rochester – I know he has some serious problems…but Bronte punishes him so thoroughly and humbles him so completely that by the end of the book I really believe their romance.  And the last section is rather adorable.

3) Northanger Abbey by Jane Austen
Catherine Morland and Mr. Tilney – Mr. Darcy is the famous Austen hero, but I ❤ Mr. Tilney instead.  A smiling man who reads Gothic novels and knows his muslins–what’s not to love?

4) Enchantress from the Stars by Silvia Louise Engdahl
Elana and Georyn – The only bittersweet ending on my list, a beautiful love story about two people from, literally, different worlds, who change each other forever but can’t ever be together.

5) The Lunar Chronicles by Marissa Meyer:
Well, everyone – This quartet has four wonderful, engrossing love stories.  Cinder and Prince Kai were a hair behind the others; Scarlet and Wolf were as marvelous as Winter and Jacin; and my favorites were Cress and Thorne.  I have a soft spot for charming rogues with good hearts.

END_OF_DOCUMENT_TOKEN_TO_BE_REPLACED

Today I’m returning to the Friday Face-Off meme, created by Books by Proxy, with weekly topics hosted by Lynn’s Book Blog.  The idea is to put up different covers for one book, and select a favorite.

I thought I’d do something a little bit different, because the first book that came to mind was a metaphorical crown: The Shepherd’s Crown by Terry Pratchett, last book in the Discworld series.  Unlike last week, all the covers for this one are pretty good–and no one’s made the mistake of showing an actual crown! I like the simplicity of this one, and the way they evoked a crown without actually depicting one.  It has an appropriate natural and homey feel with the bees and the sand dollar. This one is more communicative, and I like how the images glow against the dark backdrop.  The Nac Mac Feegle on her hat brim is a nice touch, and I can’t decide if I like that her expression isn’t sweet, or if it’s just a touch too irritable.  But it kinda fits! I love the energy of this one, the action promised in her cloak and those massive boots, and I like the swarm of Nac Mac Feegles all around her.  And Tiffany’s expression here feels perfect.  This is also the only cover that makes it look like a comedy! In some ways less striking than the previous cover, this one is still my favorite, because I think it’s the cover I needed on this, Pratchett’s posthumously-published last book.  We still have the witch’s hat, the swarm of Nac Mac Feegles and the mountain landscape, but I love the way Tiffany is clearly leading them here.  This cover captures an element the others don’t, that this book is about Tiffany accepting the (metaphorical) crown as a new leader in her world.  Tiffany actually looks like a (metaphorical) shepherd here, and there’s something very satisfying in that.

Have you read this one?  Which cover do you like best? 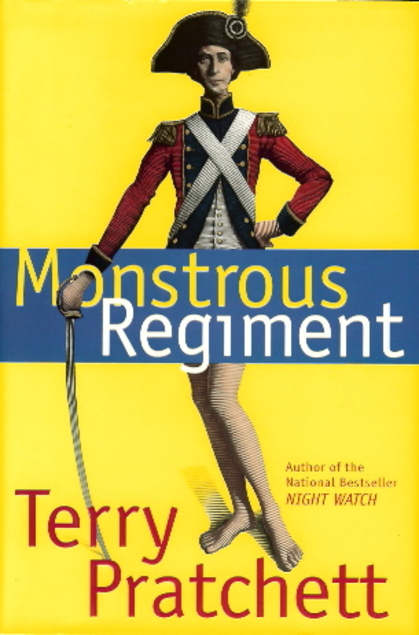 Monstrous Regiment by Terry Pratchett has been on my radar as a soon-to-read Discworld novel, so when I needed a new audiobook and it was available–perfect!  This turned out to be one of Pratchett’s more overtly satirical novels.  It was still funny, but there were also some darker elements highlighted.

This one takes out of the familiar territories of Ankh-Morpork or Lancre, to Borogravia, a tiny country fighting a war against all its neighbors.  Polly’s brother Paul went away to war some time before, and now Polly has decided to set out in search of him–by joining the army disguised as a boy, of course.  She joins the last party of recruits heading for the front, a motley group including a troll, a vampire and an Igor (pretty much what you’d think).  It become quickly clear that nearly all are girls in disguise, although their commanding lieutenant remains blissfully unaware of that fact.  Meanwhile, Borogravia’s war is disrupting transcontinental communication for Ankh-Morpork, and Commander Vimes of the Night Watch has been sent to handle the situation.

Pratchett is at some of his gender-political satirizing best here.  A thematic issue since the third Discworld book (Equal Rites) he’s fully engaging here.  There’s much discussion of how the world feels different (and regards the girls differently) when they do something as simple as putting on a pair of trousers.  I don’t think (I might be wrong) that Pratchett ever directly states that women are as capable as men (but not necessarily wiser or more interested in peace).  He simply tells a story that shows equality between the genders in no uncertain terms.  It’s far more effective that way. END_OF_DOCUMENT_TOKEN_TO_BE_REPLACED