I’ve been thinking about favorite books I haven’t yet reviewed to see if I’m missing anyone important–and I thought of Pern.  The Pern books are Anne McCaffrey’s epic dragon series, and if you’re a fan of science fiction or fantasy, you probably know them.

Pern is a distant planet where survival is complicated by Threads, strange burning filaments that fall from the skies at intervals, consuming anything they touch.  Pern is protected by dragons and their riders, who burn Threads from the skies before they can touch the ground. 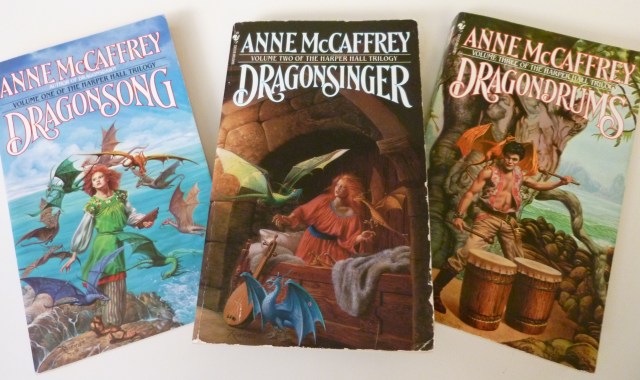 There are a large number of books within the Pern series, some more or less connected to each other, spanning a couple thousand years of Pern history.  My particular favorites are the Harper Hall Trilogy–and don’t worry, you don’t have to know the entire complex history of Pern to read them!  The Harper Hall Trilogy focuses mainly on Menolly, a girl living in a small fishing village.  She dreams of making music, but in her conservative village, girls aren’t supposed to become harpers.

Harpers are the musicians, teachers and historians of Pern.  The society relies mainly on oral history, and harpers write and teach the music that records Pern’s history and stories.  Every village (or hold) has a harper to teach the children and provide musical entertainment.  The harpers train at the Harper Hall, a sort of musical boarding school and university.

Menolly, forbidden to write music but unable to resist, runs away–and discovers fire lizards.  Fire lizards are like miniature dragons, and wouldn’t it be incredible to have a miniature dragon for a pet?  Menolly’s adventures with music, dragons and surviving are exciting for the first volume.  The second volume takes Menolly to the Harper Hall, to meet a new cast of excellent characters and to see more of Pern.  The third book focuses on Menolly’s friend Piemur, who has his own adventures.  I have to admit I found them less engaging than the first two books, but still good.

One of my favorite parts of the Pern books is the complex society McCaffrey has created.  Dragons and Harpers are just one part of it.  Everyone has their own place, as Lord Holders or craftsman or runners.  Pern has fairly minimal technology, perhaps on a level with the Middle Ages, but they have skilled craftsmen and their own methods of keeping society functioning–and it all seems to work!

The other books in the series are mostly targeting an older audience, so while the Harper Hall Trilogy could be in the kids’ section, the others are at least YA.  I like a lot of the chronologically-early Pern books.  In the later books in the series, Pern rediscovers its history as a very far-flung Earth colony, and begins to rediscover their lost technology.  Frankly, I think it was a mistake, because complex, fascinating Pern begins to increasingly resemble Earth–which is just not as interesting to read about.

But the Harper Hall Trilogy is wonderful.  And if you don’t want a pet dragon now, you will by the end!

4 thoughts on “Making Music for Dragons”