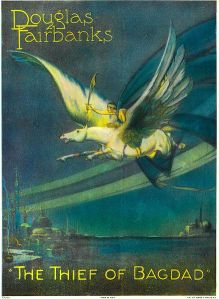 My first movie review for Once Upon a Time‘s Quest on Screen, Mirror, Mirror, came out just in March.  My next one is…a good bit older!  Thank you to Sarah, whose review got me intrigued by Douglas Fairbanks’ The Thief of Bagdad–from 1924!

I’ve been wanting to watch a good silent movie ever since seeing The Artist and Hugo, two homages to the silent film era.  So I was excited to find out this was streaming on Netflix.  I’m convinced this was the big-budget action film of its day, and it was excellent: fun, exciting, some very impressive effects and a handsome leading man.  My biggest complaint?  That missing H in “Bagdad.”  Other than that, it was a wonderful film, and a wonderful taste of the silent movie era.

Douglas Fairbanks plays the title role, as a devil-may-care thief who takes what he wants and lives life with gusto.  One night he sneaks into the royal palace, where he sees the princess and falls in love with her (as people do, in fairy tales and legends).  When suitors are summoned to the palace, the thief also returns, disguised as a prince.  It turns out the princess favors him too, but his ruse is soon found out.  To buy some time and avoid her villainous crop of other suitors, the princess demands that they all go on a quest, and whoever returns with the most impressive gift will be the one she marries.  Then it becomes your traditional fairy tale, with the hero and the villains all off on journeys through strange landscapes seeking magical artifacts.

Sound like a lengthy plot for a silent movie?  It is–and it’s a lengthy movie!  It’s two and a half hours long, so best be prepared to sit down and focus for a while.  It was well worth it! 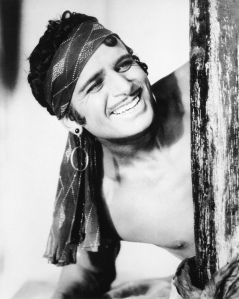 Douglas Fairbanks is enormous fun as a slightly campy, ever so enthusiastic and confident thief.  There are several scenes near the beginning as he pulls off clever sleights of hand and robberies, and one scene where he goes into such raptures over food he smells that I couldn’t imagine how he would get more excited about the princess.  It turns out he didn’t–he plays that more subdued and more realistic.  He gets more serious overall in the second half of the movie, but I also think the plot gets more interesting then, so it evens out.

For 1924 (and possibly even, say, 1960) the effects are incredible.  I couldn’t get over the sets.  If they had wanted to use the same sets for a movie about giants, they’d have been ready to go.  There are endless enormous walls and archways, sweeping staircases and giant doorways.  They’re the kind of things that seem like they must have been built in miniature, to only be shown from a distance–but they’re shown up close, with characters climbing over walls and going through archways.  So either they really built the sets to scale, or they used some very impressive camera angles, to create tricks I honestly couldn’t spot.  You know all those archways and long hallways in the new Star Wars trilogy, where it’s so painfully obvious that it’s all CGI?  Whatever they were doing back in 1924, it was more convincing to my eye.

There’s also a convincing flying carpet and magical rope that Douglas Fairbanks climbs up, and a few monsters to fight.  The monsters were, well, not what you’d get today, but I feel like I’ve also seen movies made in the forties or even the sixties with less convincing monsters.  Then there’s the cast of thousands for an army at the end.  Some may have been stock footage or clever angles, but I’m sure they had crowds.

I haven’t watched many silent movies, so it was fascinating to see this one.  I discovered that I recognized Douglas Fairbanks at once, even though I can’t honestly say that I’ve ever seen him in a movie before.  He must be one of those people who’s filtered into the consciousness.  I didn’t feel like I had trouble following anything, and (with a few exceptions) the acting didn’t feel over-the-top dramatic to make up for the minimal dialogue.  I did find, though, that I had to really focus.  I often do other things while watching TV, things that don’t require a lot of higher brain function but do require my eyes.  I realized how much I depend on listening to the TV to follow something…and for a silent movie, I had to really watch!

It wasn’t actually silent, of course, as there was music throughout.  It was a jaunty, fairly ignorable tune, and they honestly may have been playing the same five minutes of music again and again–I couldn’t really tell.  I think it did what it was supposed to do, avoiding an eerie actual silence and adding to the light-hearted tone of the movie.  There were moments where I thought they might have done more with the music to add a serious or suspenseful tone, but mostly it was good fun.

The whole movie was good fun–light, funny, exhuberant and fanciful.  If you’re looking for an enjoyable romp of a silent movie, I highly recommend it.  And if you’re a fan of Disney’s Aladdin (I am), I have no doubt that someone putting that movie together went back and watched The Thief of Bagdad first!

Other reviews:
Sarah @ Reading and Writing and Movies, Oh My!
Caught Frenching (French Press Vintage)
The League of Dead Films
Tell me if you’ve reviewed it!

10 thoughts on “A Silent But Enthusiastic Thief”