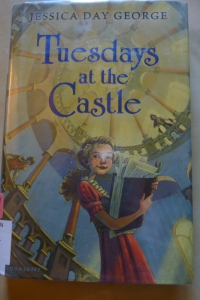 What if a castle was alive?  That idea is the big draw for me in Tuesdays at the Castle by Jessica Day George.

The castle of the title would be a very confusing place to live, but it’s great fun to read about.  The castle doesn’t talk and it rarely takes immediate actions like slamming doors, but it has a clear presence.  And it has a habit of changing itself when it’s bored, or wants to make a point.  So rooms shift around, new towers appear, and you never quite know where you’re going.  The castle also arranges and furnishes the rooms of its inhabitants to make some none-too-subtle points.  People the castle likes gets lovely rooms, while people the castle hates find their rooms getting increasingly smaller and more unpleasant.  The castle has to approve of each king and heir, and changes their rooms to reflect its feelings.  It’s all a wonderful concept.

We wander the castle with Celie, the youngest princess and the castle’s favorite.  The feeling is mutual; Celie’s greatest goal is to create an atlas of the castle (which strikes me as quite impossible, but good for her for trying). The plot gets into motion when Celie’s parents and older brother are ambushed on a journey and disappear, presumed dead.  Celie, her sister Lilah, and her brother (and crown prince) Rolf have to band together when conspiracies between the royal council and a foreign prince threaten their kingdom.  Fortunately, Celie and her siblings have the castle on their side…

This is a cute book aimed at a fairly young audience.  The characters are likable and well-defined, if not terribly complex.  Lilah is quite proper, Rolf is striving to live up to his role, and Celie is creative and daring and determined to fight back.  She’s a good heroine who I think younger readers will very much identify with and enjoy.

The plot moved along well, although the ending did feel ultimately a bit contrived and convenient.  Still, it’s the kind of happy ending I want from a kids’ book, so that’s a fairly mild complaint.

The castle was my favorite part.  The rest was a pleasant but not particularly striking kids’ fantasy novel.  The castle was the unique bit, and I’d love to see more stories with this setting!

I think this would be a great read for younger readers, and it’s fun for older readers too, if you’re looking for a light story without a great deal of depth.  It wasn’t irritatingly and unreasonable shallow, as some books are, but it does feel like it’s targeting kids.  Which is okay–it was a fun read!

Other reviews:
Charlotte’s Library
Raiding Bookshelves
Once Upon a Twisted Tale
Anyone else?

7 thoughts on “A Castle with a Mind of Its Own”