When I found out that Lois Lowry had released a fourth and final book in her Giver series, I had it on reserve at the library within five minutes.  Apparently everyone felt the same way, as I was about #25 in line.  That actually worked out perfectly, because it gave me time to reread the first three books!  Which also seemed to be in high demand…so perhaps other people felt the same on that too.  Today I want to talk about those three–and then discuss Son in its own review next week. 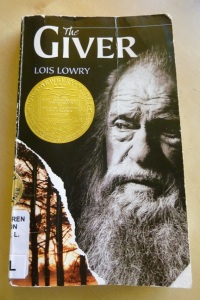 The most famous, I believe, is the first book, The Giver.  I remember a teacher read it to us in sixth grade, which is the same age Jonas is in the book (probably not a coincidence).  Until I picked it up again, I would have guessed that I had reread it more recently–but I don’t think so anymore, because it felt so different reading it as an adult.

Jonas lives in a very carefully regulated community, where a council of elders decide how each person’s life will be lived.  Everyone is assigned a career at age twelve.  Later on they’re assigned a spouse, and then given children.  When Jonas turns twelve, he is assigned the mysterious role of Receiver, the keeper of the community’s memories from a time before.  As he gradually receives memories from the old Receiver, now called the Giver, Jonas begins to question the world around him.

As far as I can remember when I was twelve, I didn’t find this book disturbing until most of the way through, when I found out what it really means to be “released” from the community.  Reading it as an adult, I was disturbed by page one, when a plane flies over the community unexpectedly and everyone, children and adults alike, stop in their tracks, paralyzed by uncertainty and fear in the face of anything different.  There is something really wrong with this society.

The more you read and the more you find out, the worse it gets.  Lowry has created an incredibly chilling book that is deceptive in its simplicity.  The language is simple, the book is short (I read it in a day) and it’s very much about a child–but it is so powerful.  Part of the chilling nature is Jonas’ easy acceptance of the world as it’s been presented to him.  I think when I was twelve I accepted it right along with him.  As an adult, I’m horrified immediately, while the narrator goes along without seeing a problem for most of the book.

This is not a flashy dystopia–no one’s bleeding, no one’s starving or forced to fight to the death in an arena.  The community is designed to prevent pain.  But it is nevertheless a terrifying vision of a future with no independence, where the individual is completely subjugated to the “good” of the community, and the goal of eliminating pain has eliminated all positive emotions too. 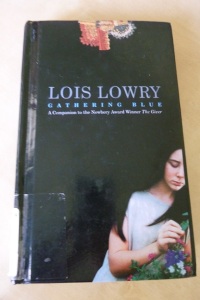 Now how do you follow that book?  Book two is Gathering Blue, which does not really seem to have any connection to The Giver (more on that in a bit).  This is set in a different future community.  Kira’s community is not neat and ordered like Jonas’.  Her village lives a subsistence life with no room for warmer emotions in the fight merely to survive.  Anyone who can’t contribute is killed.  Kira, born with one bad foot, was saved in childhood by her caring mother.  Now that her mother has died, Kira saves her own life through her talent for embroidery; the village elders choose her to repair the Robe that records the history of their world.

Kira’s people are as much dehumanized as Jonas’, albeit in a different way, and the governing body has no more concern for people.  It’s fascinating to watch more and more be revealed about her community.  Kira is a particularly good character, and there are good mysteries to unravel in her world.  I remember the first time I read this, I was so frustrated by where it ended!

So it’s a good thing there’s book three, Messenger, which ties the first two books together and gives us answers to their inconclusive endings–if not a final ending yet.  This book focuses on Matty, a young friend of Kira’s.  He’s living in a new village, a warm and welcoming place founded by outcasts from other, harsher communities.  But something is changing.  A mysterious figure known as the Trademaster has been inviting people to trade away parts of themselves–honor, kindness, strength–for whatever they most want, and the attitude of the whole community is hardening.

This is the first directly fantastical book.  There are fantasy elements in the first two, but they don’t feel like fantasy.  Jonas’ receiving of memories feels like a kind of hypnosis, and Kira’s embroidery abilities seem like they could be magic, or could be only inspiration.  This book features the Trademaster and his abilities, as well as a sentient, hostile forest, and a special ability Matty is learning to use.  Kira and Jonas both return, so we find out more about the next few years of their lives, and about their clearly magical abilities too.

We again see a theme of dehumanizing.  Jonas’ people lost their humanity trying to escape their pain.  Kira’s people are ground down by poverty and self-interest.  Matty’s people are sacrificing the best of themselves in the interest of greed.

Messenger is in some ways the weakest book, with its primary value bridging the two stronger ones.  I don’t feel like Matty is as effective a character as Jonas and Kira, and while Trademaster is terrifying, he’s also flashier–and we lose the subtle horror of the first two books that was so much more chilling.

However–I also think Messenger gets some criticism because it’s been perceived as the final book of the series.  It does part of that job, tying some things up, but it doesn’t give a strong finish.  Seeing it only as a bridge book leading to book four, I think it lives up to that role very well.

And book four, Son, gave me that stronger finish I was looking for.  But that will be the next review…

Buy it here:
The Giver

4 thoughts on “The Gift of The Giver Series”