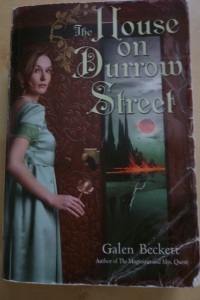 In another read for Once Upon a Time and my continuing efforts to finish series, I read The House on Durrow Street by Galen Beckett.  (Read my review of the first book, The Magicians and Mrs. Quent)  I loved revisiting the world of Invarel, and I feel like I’m fonder than ever of the characters.

This book kept up some of the style of Austen and Bronte, without adhering to their plotlines (as in the first book).  In fact, I didn’t feel like plot was a strong point of the book–but that was okay!  Rather than strong plot elements, it felt like we were just reading about the continuing lives of the characters, and though I feel like I should object, in actual fact I found it entirely satisfying.

Picking up not long after we saw them in the last book, we continue with the same three major characters, Ivy Quent, Mr. Rafferdy (who must have a first name, but I don’t remember it), and Eldyn Garrett.  Ivy is overseeing the refurbishment of her father’s house (on Durrow Street…) and enjoying whatever time she can snatch with her husband, when he isn’t busy with his work as an Inquirer.  Mr. Rafferdy is being dragged into responsibility by his father’s poor health, which has forced his son to take his place in Assembly (rather like the House of Lords), despite his best efforts to have no impact at all.  Eldyn is working as a clerk for the church, but finds himself continually drawn by the illusion plays–and by one of the actors.

Swirling around these more ordinary affairs are continuing magical mysteries, and hints of much bigger troubles afoot.  There’s political upheaval, growing revolts, and even the heavens are falling out of line, as the ever-reliable almanacs can no longer predict the length of day and night with accuracy.  The funny thing is, most of this seems to be going on in the background somewhere–the characters observe it or touch on it peripherally (and a little more directly, near the end) but usually it’s not the focus.

I felt like that should annoy me–but actually, I kind of enjoyed watching ordinary people carry on their relatively ordinary lives.  It felt wonderfully realistic somehow.  All that said, I probably will be bothered if some of these elements don’t become more central in the third book!

This book followed the same pattern as the first one, switching between viewpoints of the three major characters, with a slight variation.  This time Ivy alternated chapters with either of the two men, instead of cycling evenly through all three (most of the time).  I approved–I always liked Ivy’s chapters best.  I think it’s that Ivy is interesting whatever she’s doing, while Eldyn and Mr. Rafferdy are only interesting when they’re doing something interesting–which they did for most of the book.  That distinction was true in the first book, but may be less so now, as I think I grew increasingly attached to both of the men throughout this second book.

But I continue loving Ivy as a character, and enjoyed her relationship with Mr. Quent.  I wish he’d been more central!  They have moments together, but he spends a lot of the book off doing something else (which could make a great companion book…)  Considering the third book is titled The Master of Heathcrest Hall, I hope he’ll be more directly involved.  When they are together, it’s wonderful how much they obviously love and trust each other.  In fact, he’s so trusting that there are moments when I just have to wonder…is he really sure that he’s really that glad that she’s getting on so well with Mr. Rafferdy?  Really?

Mr. Rafferdy undergoes some very nice character growth here–he was already starting to find himself a bit in the last book, and he continues that process here.  Since he also continues to be in love with Ivy, I’m really wondering how that’s going to turn out for him…

Eldyn went through quite a bit of self-revelation as well, and I thought he was posed with some very interesting conflicting pulls.  It was a little disappointing in that I thought it ultimately worked out too neatly, by having circumstances make his choice much more clear than it had been (or might have continued to be).

I know I’ve come to this trilogy a bit late, but here’s where it pays off–because now I can go swiftly on to the next book instead of waiting for it!  I have several others I very much want to read too, so I won’t get to Book Three immediately…but it’s definitely on the short-list to be read soon.  I’ll let you know how it goes!

Buy it here: The House on Durrow Street

3 thoughts on “The House on Durrow Street”