I’ve been looking back at old favorites in rereads lately.  Today I thought I’d share an early review of one of my favorite series, The Bagthorpe Saga by Helen Cresswell.  These are among the zaniest, most hilarious of books…

Some of my favorite characters live inside of Ordinary Jack by Helen Cresswell.  Ordinary Jack is Book One of the Bagthorpe Saga.  The Bagthorpes are a family of geniuses, each with a precise number of “strings to their bows.”  That is, a number of talents (and each one can quote how many he/she has).  That’s true for all except Jack, who is ordinary, and politely disdained because of it.  Jack is complaining about the situation to his Uncle (by marriage) Parker one day, who hits on a scheme to convince the rest of the family that Jack is in fact a gifted psychic who can see visions and predict the future.  Chaos ensues. 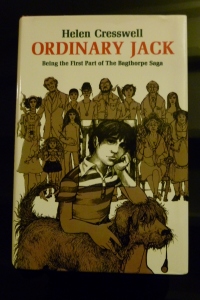 Jack and Uncle Parker are a fairly rational pair, who will chart you through the madness of the rest of this cast of truly hilarious characters.  There’s Mr. Bagthorpe, a TV writer who loudly and frequently complains that everyone is disrupting the delicate vibrations he needs to write.  There’s Grandmother, who cheerfully starts an argument with everyone, and is in years-long mourning for her beloved pet cat Thomas, who everyone else remembers as the worst-tempered animal who ever lived.  There’s Uncle Parker’s daughter Daisy, who is four years old and likes to write on walls and set fire to things, often with literally explosive results.  There’s one scene involving a birthday party and a box of fireworks hidden beneath the table…  Daisy’s mother, Celia, is a poet and far too ephemeral and dreamy for this world, who feels Daisy’s spirit shouldn’t be restrained.  For reasons Jack never quite understands, Uncle Parker is madly in love with her.

That’s only a sampling.  They are all people I would never want to know in real life, and would definitely never want to let into my house (especially Daisy!) but they’re enormous fun to read about.

There are ten books in the series, taking the Bagthorpes through adventures including television fame, a haunted house, and more than a few explosions.  The later books do vary in quality somewhat–they’re all fun, but at some point Cresswell stops having plots and just starts throwing the characters together and letting them react off of each other, and some of the results are better than others.  But the first few are excellent and all are enjoyable.

And Ordinary Jack is worth the read if only for the scene about the birthday party and the fireworks!

Other reviews:
A Tapestry of Words
Letters from a Hill Farm
Anyone else?

Buy it here: Ordinary Jack: Being the First Part of The Bagthorpe Saga