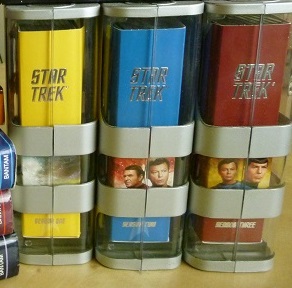 For the Sci Fi Experience this year, I’m embarking on The Great Khan Adventure, an attempt to put together all the pieces of the story of Khan Noonien Singh, as portrayed on screen and through Greg Cox’s trilogy of books.

It was a bit tricky deciding where to begin–“the beginning” is not straight-forward when multiple timelines converge in most installments.  The Eugenics Wars books take place chronologically before “Spaceseed” in Khan’s life, but after “Assignment: Earth” in Gary Seven’s life–and the Kirk-portion of the books is after the episodes.

Solution?  The episodes were written first, providing the background for the books, so I’m starting there!  This post wraps together several episodes of Star Trek which would appear to have no connection to each other–but they all intersect the 20th-century in some way, and prove relevant to the books.  Taking them in chronological order (as Kirk and crew experience it, at least)…

Quick Plot: Due to an accident with a black hole, the Enterprise is flung back in time to the 1960s.  Spotted by the American airforce, they have to beam pilot John Christopher aboard, to avoid being identified as a UFO.  Next problem: how to send Christopher back, with all he knows now about the future.

Thoughts: The basic plot here is pretty decent, of the Enterprise crew scrambling to hide their own traces from a military watching for UFOs.  Although he’s a one-episode-only character, Christopher may be the most moving part, a man adamant about returning to his family in the face of all the Enterprise crew’s insistence that the risk is too great.  There’s also some nice humor in here, from a military sergeant’s stunned reaction when he too is beamed aboard, to Kirk’s deprecating attempts to downplay his uniform when captured by military personnel.

And it does all end happily…even if the solution seems wildly implausible from a scientific point of view–and that despite the fact that I’m willing to accept slingshotting around the Sun as a valid method of time travel!!

Best Quote:
Christopher: I never have believed in little green men.
Spock [stepping into Christopher’s view]: Neither have I.

Quick Plot: The Enterprise picks up a sleeper ship and revives its leader, a genetically engineered superman from the late 20th century.  The man turns out to be Khan Noonien Singh, who ruled a quarter of the planet during the Eugenics Wars of the 1990s.  Khan wins the loyalty of Ship’s Historian Marla McGivers, and with her help he is able to waken his crew and take over the Enterprise.  Kirk wins out in the end, and Khan, Marla and the rest are exiled to Ceti Alpha V, there to build a new empire.

Thoughts: It’s been a while since I saw this one, and while I remembered a lot, I’d forgotten how brutal Khan is.  Mostly it’s his treatment of Marla–apparently crushing a woman’s hand is a sure way to win her love!  Khan may consider Marla “a superior woman” but I was rather disgusted by her myself.  She falls hopelessly under Khan’s sway immediately, completely betraying all her previous loyalties.  I remember Marla as a major part of Cox’s third book, so I’ll see if I feel more sympathetic after that!

It’s also too bad they didn’t do more with the Ship’s Historian.  That actually seems like a fascinating, and potentially valuable, position on the ship.  Where, for instance, was Marla when they got flung back into the 1960s?  Or considering how many planets they encountered that paralleled Earth’s history, you’d think a Ship’s Historian would have some useful insights.

Apart from his highly questionable status as a romantic lead, Khan was an intriguing character.  Clearly ego and superiority run mad…although in Khan’s case, he really is stronger and smarter than ordinary people.  Just not, unfortunately, wiser.

One other thing…there was something that makes this episode feel very dated, and not the reference to Khan ruling a quarter of the Earth during the 1990s (I remember Cox does a nice job explaining why most of the population was unaware of “true” events).  What got me was that it took several days for the Enterprise crew to figure out who Khan was–even though they knew he was genetically modified, and he gave them the name Khan.  Just for kicks I did a Google search for “genetic superman Khan.”  In literally half a second, Google gave me his Wikipedia page, his Memory Alpha entry, and pictures of both Ricardo Montalban and Benedict Cumberbatch.  And that’s a fictional dictator, not a real one!  I’ll have to see if Cox comes up with any explanation for Khan’s continued obscurity in the 23rd century…

Best Quote: Oddly enough, Khan never actually says what has probably become his most famous “quote.”  He does reference Milton, and shortly later…

Scott: It’s a shame for a good Scotsman to admit it, but I’m not up on Milton
Kirk: The statement Lucifer made when he fell into the pit: “It is better to rule in Hell than serve in Heaven.”
Spock: It would be interesting, Captain, to return to that world in 100 years and learn what crop had sprung from the seed you planted today.
Kirk: Yes, Mr. Spock. It would indeed.

Quick Plot: The Enterprise heads back to the 1960s (deliberately this time) on “historical research,” but swiftly encounters mysterious Gary Seven and his equally mysterious cat, Isis.  Seven identifies himself as a human trained by aliens and sent to Earth to protect it during its nuclear age, and does not appreciate interference by the Enterprise or by his predecessor’s secretary, Roberta Lincoln.  Kirk and his crew spend the episode trying to figure out whether Seven means destruction or salvation through his interference with an imminent rocket launch.

Thoughts: Seven and co. are excellent in this episode.  Kirk and co. don’t fare so well, as I can’t help but feel they’re interfering where they don’t belong.  They’re time travelers–Seven’s intentions are irrelevant, because as visitors from the future they shouldn’t be interfering in the past.  Unless, of course, you accept the theory of a Predestination Paradox, in that they must always have been fated to interfere (they do come to that conclusion in the end, although the evidence for it seems shaky to me).

Any case, this is an intriguing episode with particularly wonderful guest stars in Seven, Roberta and Isis.  I’ve heard this was intended as a pilot for a possible spin-off, and it definitely succeeded in making me want to know more about these characters.  Which is excellent, since I’m planning to read two books about them very soon…so more on them later.

Best Quote:
“Without facts, the decision cannot be made logically.  You must rely on your human intuition.” – Spock, being totally unhelpful, though also making a rather large concession, for him

Quick Plot: In desperate (though surprisingly calm!) need of a cure for a plague ravaging the Enterprise, Kirk, Spock and McCoy beam down to an apparently uninhabited planet.  There they meet Flint, who invites them back to his elegant mansion furnished with original-but-unknown Da Vincis.  They meet his ward, Rayna, a beautiful young woman Kirk develops immediate feelings for.  Spock’s scans reveal that Flint is 6,000 years old, and when confronted, Flint admits to having been Da Vinci, Brahms, Merlin, Methuselah, and hundreds of others.  Rayna, too, is not as she seems.

Thoughts: It occurs to me that this is once again an episode with fascinating guest characters–but perhaps that make sense, since I did pick the episodes with characters who turn up in Cox’s books!  I’d love to read a book about Flint, following him through time periods…  My other favorite part of this?  Spock’s ability to recognize Da Vinci paintings, as well as Brahms’ handwriting.  I see they didn’t suffer from the lack of a Ship’s Historian!

Best Quote:
Spock: Captain, your primitive impulses will not alter the situation.
Kirk: Stay out of this, we’re fighting over a woman.

Quick Plot: En route to Earth to drop Nog off at Starfleet Academy, an accident flings Quark, Rom and Nog back to (you guessed it!) the 20th century–1947, to be precise.  With their crash sparking rumors in Roswell, the Ferengi are identified as Martians and held for examination.  Quark has grand plans to sell technology to the primitive hew-mons, but of course things don’t quite work out…

Thoughts: An almost purely-Ferengi episode, this is wonderfully hilarious, from discussions of the Ferengi afterlife to Quark’s economic ambitions to Rom’s frantic wailing for his “Moogie” (mother) when things go bad.  In the guest star contingent, we have Nurse Garland and her interpreter fiance, Jeff Carlson, who are so earnestly 1940s-era, they practically glow with it.  It’s a lot of fun to see time travelers who are worried less about the timeline than about the opportunities for profit!

Best Quote:
Rom: Maybe this is the Divine Treasury.
Quark: Oh, don’t be ridiculous, the Divine Treasury is made of pure latinum. Besides, where is the Blessed Exchequer? Where are the Celestial Auctioneers? And why aren’t we bidding for our new lives, hmm?
Rom: You don’t think we’re in…the other place?
Nog: The Vault of Eternal Destitution?
Quark: That’s impossible, the bar was turning a profit!

That’s all for now…though I may watch more as I go through the books and find out what else is relevant. 🙂  Next stop on the Adventure: the 1970s with Gary Seven and a very young Khan.  In other words, Volume One of The Eugenics Wars by Greg Cox.  Stay tuned!