Happy Monday!  I recently signed up for Disney+ so that I could watch Hamilton for the Fourth of July (excellent, by the way!)  Before my month-service expired, I decided it was the ideal time to re-watch the original Star Wars trilogy after too many years.  And then I made a video review!

Happy Star Wars Day, and May the Fourth be with you!  I may be a Trekkie, but I enjoy a good Star Wars book too, and today I’m offering a video review of what I think are the best: The Thrawn Trilogy by Timothy Zahn.  Celebrate Star Wars Day by watching my review below!

I recently gave a tour of my L. M. Montgomery collection, and today I thought I’d invite you to visit another shelf.  I don’t discuss Star Trek as often, but I do have almost as many books!  Check out the video below for some comments on my favorites.  For my Trek fan readers, I’d love to hear about your favorite books too! 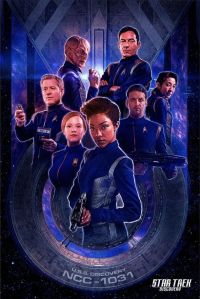 I am very late to this game–a full year, in fact–but I finally watched Star Trek: Discovery.  Lack of access and doubtful reports kept me from exploring the newest installment of the Star Trek franchise for a long time.  I finally realized the library had it on DVD, which seemed like the perfect level of investment.  Watching it was, frankly, a bit rocky…but I’m ultimately glad I did.

As the series opens, it’s frankly hard to tell (or feel) that we’re in the Star Trek franchise.  I use the word “franchise” deliberately, because the universe is discernible, but the things that make Star Trek what it is seemed notably lacking.  We’re following the story of Michael Burnham (Sonequa Martin-Green), Starfleet officer who is involved in the start of a war with the Klingon empire.  She blames herself for the war; I frankly never figured out how it was her fault.  Discovery, the ship, doesn’t show up until Episode Three, where we meet her captain, Gabriel Lorca (Jason Isaacs) and engineer Paul Stamets (Anthony Rapp).  Stamets is the inventor of a new propulsion system that runs on mushrooms.  Sort of.  It may be the key to winning the war with the Klingons.

I’m just going to be upfront here and say that I struggled with a LOT of things in this show.  Most of it was resolved or at least moved past by the end of the season but…yeah, if this didn’t have Star Trek as part of its title, I probably wouldn’t have watched past the third episode (which I still think was the low point).  In the interest of giving a full picture…I’m going to go ahead and include spoilers.  You have been warned!

END_OF_DOCUMENT_TOKEN_TO_BE_REPLACED 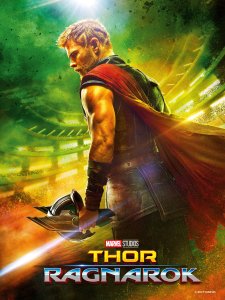 I may have confessed this before but, at the risk of harming my geek cred, I’m not much into Marvel.  I watched the first movie of several of their franchises, and didn’t feel inclined to continue.  Although I make exceptions for Dr. Strange and Guardians of the Galaxy.  And now, as it turns out, Thor: Ragnarok.

I came late to this one, but I finally watched Ragnarok last month.  From the trailer and the reports of people I knew who watched it, this seemed to be a funnier Marvel one than most–and it was!  Which is a bit odd considering the titular event is the end of the world…  In brief, the goddess Hela is released on Asgard, the Norse gods’ home realm, and Thor and Loki have to work together to top her–but wind up exiled to a kind of cosmic junk heap in the process.  Where, oddly enough, they bump into the Incredible Hulk.  As one does.

I knew this was going to be a better movie as soon as it started demonstrating a willingness to poke fun at itself.  Early on Thor confronts a giant flame demon whose name I can’t remember, and tries to carry on a conversation while rotating around hanging from a chain.  Weird, I know.  But it’s really funny as flame demon tries to rant about his fiery vengeance and Thor keeps asking him to pause because he’s rotated around out of sight.  The movie kept up a similar kind of tongue-in-cheek humor, and Thor himself was a lot funnier than I remembered from previous encounters.

It also helped that we had a fairly small cast, with the action centering around Thor, Loki and the Hulk, with Hela (an unrecognizable Cate Blanchett!)  It gave a decent amount of time to showcase each character, their arc and their relationships with each other.  Much better than ensemble casts of a dozen where barely any character gets seen.

So, from a non-Marvel fan, Thor: Ragnarok gets my approval as a funny, entertaining superhero flick!