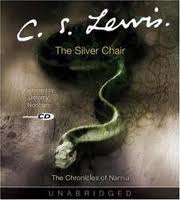 Next in line on my adventure through the Chronicles of Narnia on audiobook is The Silver Chair by C. S. Lewis, read by Jeremy Northam.  This one feels like a more direct sequel to The Voyage of the Dawn Treader, following most closely on those events and characters.

The Silver Chair begins in our world, at the very dreadful school, Experiment House.  Eustace Clarence Scrubb (much improved and no longer deserving his name) attends here, along with Jill Pole.  Fleeing from a pack of bullies, the two children find an open door in the school wall—and go through into Aslan’s Country.  Despite some mishaps, Aslan sends them to Narnia, charged with finding the missing Prince Rillian.  In Narnia, they learn that Rillian is the son of the aged King Caspian.  They set off into Giant Country in search of Rillian, guided by Puddleglum the Marshwiggle.

This is reminiscent of The Voyage of the Dawn Treader, as a journey story, but it has a much tighter focus on the quest.  Even when not immediately apparent, the various adventures (like being taken captive first by giants, and then by subterranean “earth men”) all lead towards the rescue of Prince Rillian.

Eustace and Jill are satisfying lead characters, not as noble as the Pevensies perhaps but good-hearted on the whole.  I enjoy characters who are good people trying to do the right thing, but who still descend to bickering and complaints when trudging through a snowstorm.  It’s very human, without making the characters unlikable.

My favorite character may be the non-human one, Puddleglum the Marshwiggle.  His name fits him perfectly, as he’s hopelessly doleful and apt to predict the worst.  Even though he seems like a wet blanket Eeyore at first, he comes through as courageous, sensible and dedicated.

My favorite scene is well along in the book, so spoilers beware!  After they find Rillian, there’s a confrontation with the witch who has been holding him captive.  It’s a wonderful, tense scene with an enemy who doesn’t swing a sword but uses words instead.  She uses magic, too, but the fascinating part is her mind-twisting arguments that the world above must not really exist.

This isn’t a new favorite of mine in the series (that’s still a toss-up between The Magician’s Nephew and The Voyage of the Dawn Treader).  It is a solid installment with a compelling plot and likable (but not too likable!) characters, and some nice creepy moments from truly dangerous villains.

Only the last book in the series left, the appropriately named The Last Battle.  Coming up soon (with a very exciting reader, by the way…)

Other reviews:
The Bookworm Chronicles
Living on Literary Lane
The Day Dreaming, Candy Eating Red-Headed Bookworm
Anyone else?

Buy it here: The Silver Chair

4 thoughts on “The Silver Chair”